On The Recent Work of Rory Dean 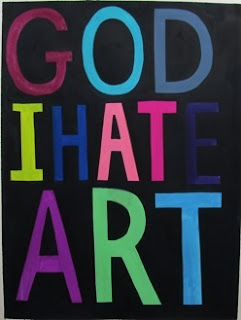 “At present, there is no means of making something pass as ugly or repulsive.
Even shit is pretty.”
- Michel Leiris
Rory Dean can be rather unpredictable. As soon as I think I know what he's doing he starts doing things that knock the crap out of me. That could be because there's something essentially irrational about his work. Not that it's inconsistent: there's a great deal of continuity between one distinct set of works and another. The unpredictability comes from what he suddenly decides to attack and how. His work isn't critical - it's adversarial, often taking some concrete aspect of the art world as its object of spite and scorn. This attack isn't always direct and it tends to involve a shift in style. While his earlier paintings took a swipe at the obsession with crass textures and colour that have been selling so well lately, his recent works push along to some of the other trends currently underway.


These new works, consciously or not, come in the middle of two of the biggest retro fads to have taken hold of the art market in the past couple of years: the return of decorative abstraction and language based art. There's a new cult of the latter evolving, mostly out of a revisiting of certain aspects of 70s Conceptual art. It was, in its origin, a strange Neo-Platonic pyramid scheme, sometimes mystical, comic or banal. Often all three. Such an 'ideologization', as Piero Raffa once put it, was meant to get its kicks from extracting the 'surplus of rational self-consciousness'. In its second coming, however, this neurotic abreaction to the material world tends more to the narrative, the anecdotal and the sentimental. The most genuinely bourgeois art has now become neo-classical in the worst sense of the term.

Dean's work seems to be completely taking the piss out of these trends, uniting what were originally warring reactionary positions in a compost heap that robs them of any integrity. His words don't communicate. He doesn't have a message, a concept, or an idea. He isn't crocheting letters for nihilism either. There's no eloquence or token profundity in spelling out 'Steve Guttenberg', although it could count as an invective. He's not just some aesthete either, even though his work is almost inevitably pretty. It's a kind of deflatable prettiness – deflatable because it's inflated in a deliberately hideous way, like a blow-up doll wearing lingerie carved out of the town drunk's old socks. 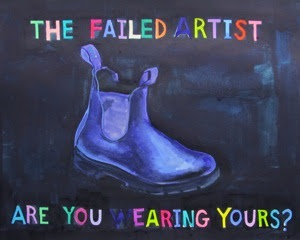 The charm of Dean's work is in his spite. It's never simply nasty though. If he hurls shit at people it's because he knows we live in it and attempting to conceptualize your way out of it only makes it more absurdly laughable. His mockery of deflated art dreams is bitter and sardonic, a self-mockery which only adds to the sense of leveling. This seems to be what fuels the kind of vicious humour that gives the work its bite. It's here that the work flirts with irony but never succumbs to it. Irony inevitably requires a moral stability and there really isn't any moralizing going on, just a kind of discharge. 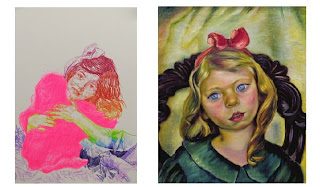 A demonstration of a strangely basic kind of labour happening here. It's not the melodramatic Victorian factory kind, but more of the cottage industry for a geeky high school girl variety. That's why you find pencil crayon drawings of Justin Bieber, along with mock maudlin drawings of odd looking children that recall the dislocated sensibility of Prudence Heward.

His text works aren't anything like Graham Gillmore's similarly colourful text pieces. In the latter's case, sense has to be re-established thanks to the discombobulation of letters and fragmenting of narrative. It asks for an investment through a momentary illegibility. Using the vaguely familiar, Dean's work assumes the investment at the outset and then cancels it, bankrupting the process and throwing away whatever meaning could be culled as profit. There's less to them than there appears. They aren't paintings about the surface but of the hollowness which it occludes. 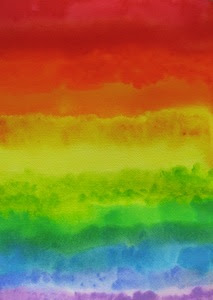 Accompanying this use of words is a leap into the use of rainbows, generally done in watercolour. The rainbows, one can suggest, are the fulfillment of their earlier appearance with his KKK garbed figures. In those images, the rainbows popped up like sentimental trinkets or magical powers – the psychotic accouterments of characters who always saw the world in black and white, or black and blue at any rate. But that world, the one of meaning in all of its stubborn idiocy, has given way to full spectrum stupidity. The engulfing rainbow is a series of essences, superficially like the pure essences that were so sacred to Mondrian or Kandinsky, but not really like them at all. For here there is no scent of the drive for the pure, that medical stench which the synesthetically blessed could find wafting out of the Russian's canvases. Instead, there's a real impurity, a sense of colour as the chaotic effect of light decay. They may be a conscious reference to the rainbow colour schemes of Franz Marc, but they are completely devoid of his utopian desire to save humanity with art. In fact, the rainbow sets the limits of anthropomorphic visual perception. Spiders, fish and many mammals experience a substantially different, far more complex and varied array of colours. That human beings like to imagine there's a pot of gold at the end of the rainbow points out how sensually impoverished we are. The rainbow is a wink at one of our many evolutionary abortions. 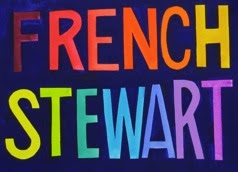 Dean's rainbows fill up the iconic lines of his mediocre public figures, or they hover beneath the twinkle of his words. And sometimes they sit alone on their own page like Hell rendered as a full-spectrum colour field painting. They aren't exercises in the faddish abstraction that's currently spilling around the galleries. They aren't nostalgic, sentimental or even decorative. Dean manages to paint rainbows that nearly seem to sneer in their vacuous idiocy. But is that because he realizes that abstract expressionism in painting is almost the same thing as the expressive pop metal of Guns N' Roses and that the art market tries to cast someone like Jackson Pollock as a kind of Axl Rose? Maybe, but it's probably not that conscious. 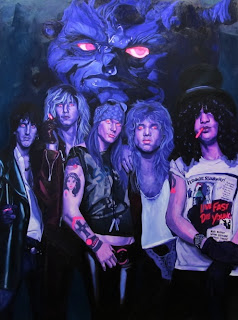 Dean is using the pathos-laden colour field to deflate things rather than instill them with the metaphysical gravitas they generically denote. This happens in two ways. First: by using the spectrum rather than a reduced set of variations on minimal hues, he disintegrates the sense of a localized integrity with its own individual decomposition, opening up each hue to its unremarkable demise, robbing it of its monadic pathos and leveling it in relativity. It isn't harmony but a spectral decay. The rainbow has an excretory function, much the way it is played out on a more figurative level by his colleague Joe Becker. Second: by placing the glittering and hollowed out names of D-List celebrities on top of them as personalized icons robbed of a face. This is intriguing given Dean's other recent propensity for displaying recognizable pop figures through a rainbow which erodes the singularity of their faces. With the names, the less familiar are rendered legible but vague. The schmaltzy lettering itself is already a deflation and a mockery of the optimism of cultural up-and-comers. These are the faces of those who dwell in a Hell for the mediocre. 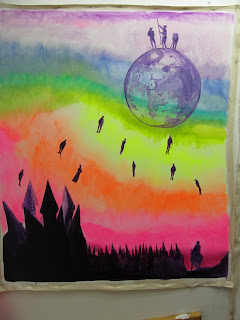 The Hell that Dean depicts is a proper Hell with a properly sardonic eschatology. It's not one of misery and tortures but of the petulant crapulence that this world consists of. His KKK figures now start to morph into rocks and mountain ridges for an alien planet. The world is in the distance, ruled over by demons, the countries running into each other like the cultivated blocks of 'expression'. Dean is a narrative painter whose characters don't really have a story. Losers, creeps and failed exercises in machismo, they're all abortions mired in shit, but the only shit art is capable of – pretty shit.

Rory Dean
My Interview with Dean
Posted by Malakoteron at 8:40 PM