An Interview With Rory Dean. 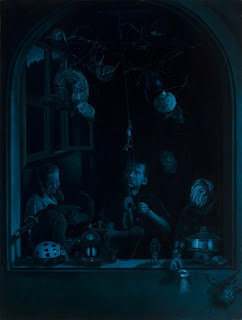 When I was recently in Montreal, I managed to meet up with Mr. Rory Dean. He used to play basketball and drink beer with my little brother, the world's most infamous bagpipe player. That's not why I met up with him though. No one is that sentimental. Actually, it's because I've seen his work around and find it curious. Although it shares certain traits with some of the trends to be found in his generation of Canadian painters, it lacks the sentimentality that seems to afflict so many. That doesn't mean that his work isn't personal, it just doesn't stop there. It has other things to do.

Although one can see traces of the naïve tradition and folk art in his imagery, it's largely misleading. Unlike the hipster artists of Toronto, he doesn't seem to use these things ironically or earnestly, but with a certain dynamic cynicism that is worked out over the long production process.

After his mixed experience at OCAD, he returned to the countryside and spent years developing a series of paintings dominated by blue and children. "One of the reasons I started using children and painting kids was because when you're a child you do things and you don't know why," he explained. The reduction of colours and the palpable darkness, both literally and atmospherically, goes a long way to make the frequently kitsch images he uses as his source material grimace menacingly enough to be transformed into something different. "It's moody. I was in Merrickville. It was dark in the winter and I wanted to make some night paintings," he says of his limited palette. 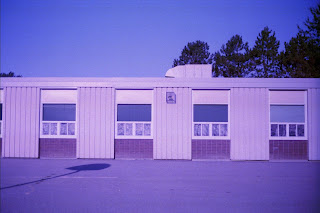 We, more or less, grew up in the same village. It was once a bit of a sink hole in the Ottawa valley which was home to coke dealers, a strip club and several in-bred families, but it has since been gentrified, pushed the bordello from its borders, and its skeletal remains of old churches and Victorian houses have been filled out with mustard stores and Christmas ornament shops. Aside from its condiments, the village may be best known for the fact that Nicholas Cage shot part of one of the most wretched films of his rather inglorious career there. Or for its significance in Ontario culture as one of the few producers of canon balls until the end of the twentieth century. That said, it's still preferable to Toronto. It's better to be a peasant than a plebeian.

His recent paintings were featured in several exhibitions in Toronto ("The Dazzle" and "New Directions II: The Prophesy"). Unfortunately, however, images of innocent and evil children and the Ku Klax Klan haven't managed to attract the attention of buyers. They aren't exactly the kind of images that people would want to hang in their condo. As a slightly drunk gallery owner told me one afternoon: the market is in an upswing because young artists don't care about politics anymore. They don't want to offend people; they just want to give them something to look at while they're eating breakfast before work. I'm not sure I would go that far, but when most young artists are trying to do more than make IKEA friendly fodder, the meaning is either circumscribed or simply jokey. With Dean it's more difficult because his paintings can be equally careful and openly antagonistic. 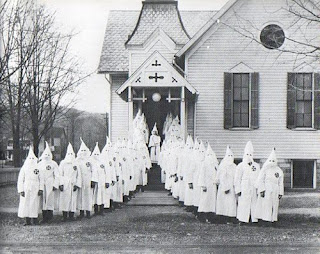 He paints from photographs. They aren't chosen purely at random. A kernel of an idea comes first and then he searches until he finds an image which could work. Once he has a material object, he paints off of it, though sometimes he discovers that what works as an image, doesn't necessarily translate to a painting and has to be abandoned. Of his frequently disturbing choice of imagery, Dean had this to say: "For me the imagery just, especially some of the images from the 1860s of these guys dressed up like that, I personally found them frightening. I don't want to sound like I'm glorifying them or anything because I am not, but these costumes that they were making were original costumes. They're not like the KKK now where you can go online and buy them, they were coming up with these terrifying masks made of all kinds of weird things like hair... it was almost like a folk artist kind of thing and they seemed to have a lot of power to them... it just seemed like imagery I could use."

Of course, the Klan were just part of the world he was creating over the course of his series of blue paintings. There's a superficial resemblance, perhaps it's something of an homage, to the work of Gottfried Helnwein in these paintings, but the differences between them are more substantial. Helnwein's work is overtly theatrical, while Dean's is closer to cinema (the frequent 'close-up's and the movie poster type picture plane he often uses). Helnwein's work is always highly public and monumental, specifically when dealing with children, while Dean's is much more private. This hints at two different kinds of secrecy in the relation between aesthetics and the art object. For this reason, his use of subject matter serves perfectly for it provides a survey of exemplars of the excluded and the exclusionary: the ultimate victims of history (children), who suffer in secret, and those who regard themselves as history's victims (the Klan), who make suffering completely public.

The paintings started from black, built up monotonously over many layers in an obsessive manner until he had a chalky matte black surface to work off of. It could take a month to prepare a surface. "Just that process is painful," he groaned. Then layer after layer of the same thing is painted. While waiting for each layer to dry, he began watching documentaries about atheism and Jesus Camp. "It was a lonely, fucking painful process making those paintings," he confessed. Even though they haven't proven to be successful from a market point of view, they helped him grow a great deal as a painter. This process also include debating with himself and his friend Joe Becker about painting as he attempted to refine his own antagonistic position to a lot of what he saw happening in painting. Of course, Dean might say I'm full of crap to try and work it out that logically. "I start with a really simple concept and ideally the end product is much more complex," he insists. "To make something that doesn't really make sense. That's the idea." All the same, the string of paintings he did were intimately connected and planned out. Inspired by his obsession with the old masters and many of the more traditional aspects of painting - like narrative - basic things which aren't really taught in art school anymore, he began piecing together a show. "A lot of these paintings, the original idea round them was that I was going to call the show A Sarcophagus For Vitriol and Vitriol was going to be a real person that I was going to make. I was going to make the girl. I did make the coffin. I carved it out of a felled tree and the paintings were going to be in a tomb you would walk in. You would see this sarcophagus and these paintings that would be related to her life but not really. They would connect to who this girl was."

His previous blue work was densely populated with ghoulish children who looked like they had walked out of horror films form the 40s and 50s only to be trapped in the settings of a Chardin painting. Monkeys made occasional appearances as well, but most of these characters dropped out as a weird mythological space devoid of any consistent time or space started to develop. "It was going to be a person from some place and time but totally made up," he said of his principle character.

A substantial part of these works is their large blackened frames. Highly tactile, they have a disquieting presence in contrast to the smooth and oddly dimensioned images they present. "The frame came first. I just had a simple idea that I would make this frame. I was actually working on a painting of Hitler and wanted to make it look like it had been to Hell and back. Like it had been through chaos or something dark. I just wanted that type of feeling to it. That's where the idea came first and then it just seemed to fit with some of the other paintings that I was working with and I wanted to connect them all together. It was more like a sculpture. At the time they felt absolutely necessary together; the painting without the frame did not feel whole," Dean explained. 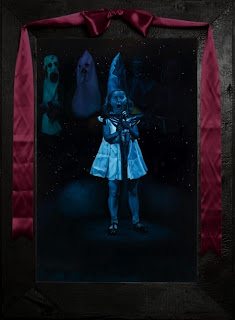 The sculptural element of the works (bows settling on rusty nails in charred black frames) seem to recapitulate much of what the paintings do – playing off things that seem like extreme opposites but which managed to be both aesthetically harmonious and emotionally unsettling. "The bow, especially the first one I did, it was more like a symbol. Something silly like that. A simple juxtaposition of something black and charred and ugly with something that was really just beautiful, silky, pretty. Simple as that. Also the ribbon had references, it sounds silly to say, of Degas when he first used the ribbon and the shoes on the original encaustic ballet dancer. The original would have been ugly and dirty. The other big reference was that, at the time, I was watching a lot of mummy things and one in particular was this girl in Sicily... this six year old girl... and this girl doesn't even look real.... she's preserved in this box and she wears this beautiful ribbon. Once I saw that, I wanted to use that idea," he enthusiastically explained.

I could talk about how he splinters narrative, thus setting up a series of incompossible histories which lead to him consistently sabotaging depth and creating an almost elastic visual field. Or about how his work, perhaps quite unconsciously, seems to filter from the gory drive that's underpinned so much figurative work in Canadian art, but I won't do that today. Instead, you should check out his website to see more of his work. Right now he is settling into the rather different world of Montreal where he is taking the blue collar approach to painting: working at it from nine to five and looking for a new project.
Posted by Malakoteron at 5:41 AM