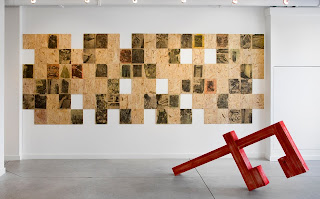 The Burlesque of Labour

...boredom is a higher state… we debase it by relating it to the notion of work.
-E.M. Cioran
There's a scene in Jean-Luc Godard's "Passion" where Isabelle Huppert's character wonders why films don't show people actually having sex or working. They're both taboo acts, extraneous or deprecating to the narrative agent, and not allowed to be fully depicted. There is a pornography of labour to art – a sense of the graphic that hints at the mechanical, but which is almost inevitably shrouded over by discourse or some precious nuance. Arguably there always has been such a thing, but for a long period it was transparency that was sought and the sign of the artist's hand was a sign or failure. Style was nothing other than that. Labour had to be as invisible as God's hand. That all changed with the rise of bourgeois art. The fad for 'de-skilling' has had more to do with a performative priapism that with a rebellion against bourgeois values in art. The fetishization of the artist became significant, their brushstrokes or 'concepts' operating as the sign language of the sublime, or at least a sublime handjob. Their handiwork, the traces of their being, became ways to evaluate its market value and instill it with gravitas. This was as true for high Modernism as it was for the collectors of regional folk art.

Liam Crockard's show "Month of Sundays" at O'Born Contemporary explicitly enacts this fantasy and casts it in the familiar terms of absence/presence and the lack which needs to be fulfilled. The signs of labour without the actions themselves make up the bulk of the work. It's usually doubled. You get the image of the laboured act (generally its result) – carefully swaddled in nostalgia – and you get the deliberately over-laboured framing of this image within the sculptural body assembled to cloak it. This body never labours and has no nudity. It's all dressing. No sweat. A smidgen of deoderized picaresque. 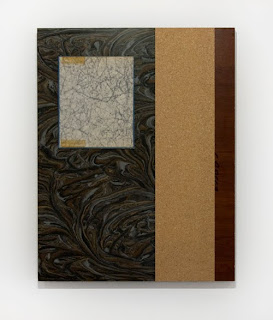 Largely assembled from woodcuts and other refuse, his pieces largely resemble common items (a chair, tools) which are rendered inutile through the exaggeration of their forms. That is, through an excess of aesthetic sublimation. What these objects point to, constantly, is their de-realization and their de-materialization into a hodgepodge of ideas. As the title of the show suggests, it's the doldrums of leisure that are really on display: a contemplative misapprehension. The exhibit is a showroom for the purchasing of an antiquarian ideal. The materials are displayed like fabric swatches or wallpaper samples, assembled for accents of physicality to aid those no longer in possession of actual bodies. Instead, the viewer inhabits the space in expectation of a narrative or reverie. It's an enabling of physicality, even if only a vicarious one. Labour becomes a source of nostalgia and desire because it is so blatantly dead and gone. But even if labour is only a spectre, the voyeur's trip through the gallery still makes them do some work to grope toward the fuzzy feeling of presence. As the artist's statement says, "The artist was present, the seat is warm." This isn't Schwitters' piss in a nook of the Merzbau or Manzoni's shit though. His collage pieces are charming regional postcards to pick up on the way. By harnessing this, Crockard is creating an operative mechanism for sentimentality, the surplus of which is an aesthetic pat on the head. 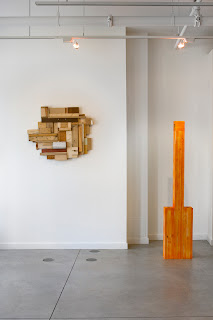 The spectres of castration are everywhere. You can see them from the solitary chair, the perforated walls, the fragmented and re-assembled actions that tile the walls and the hideously oversized and useless tools that span the floor. Like the original cult of Priapism, this is all played for sad laughs. Pornography at least assumes not merely psychic investment but a physical one as well, since onanistic action takes part in the fulfillment of a virtual form and carries it off. And unlike pornography, that 'mentalization of instinct' as some psychoanalysts used to call it, something different is at stake here. There is no discharge on order, no lurch into desublimation. Instead, there's a kind of voyeuristic inertia, like what would be left of a reality TV show if you removed all traces of its narrative and left the extended raw footage of banality within completely artificial surroundings. This could easily lead to boredom. The labour of art, as most artists know, is excruciatingly boring much of the time. In fact, boredom is one of the most important parts of artistic production. This isn't limited to art. Having worked as a labourer for several years, I can testify to its boring, repetitive, mind-numbing quality. These three aspects are all displayed in the show, but in a purely mediated form so that they can never be actualized, only contained. They are objectified into sources of delectation. Which amounts to saying that they are turned away from boredom to become fetish items for the urban set - theme park spectacles for people with more money than sense.