The Painter as Barbarian: An Appreciation of Joe Becker 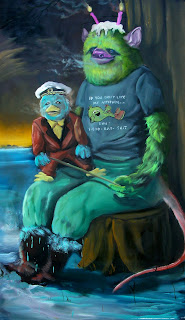 Dreams are liars; if you shit in your bed, that's true.
-Martin Luther
We live in a therapeutic society because there is no culture here, only a market. A culture is predicated on sacrifice and capitalism, as Adam Smith and everyone after him has known, is incapable of sacrifice. Instead, it has a kind of pious sado-masochism where nothing ever really happens and the social contract amounts to a fanatical aversion to facing reality. The common sense of this world is a make believe pasture where everyone's masturbatory whims are turned into sacred cows.

Canada is a country established and maintained by corporations and, like most corporations, has built itself through massive campaigns of murder and rape clothed in evangelical messages of generosity. But the myths which successive governmental institutions have promulgated about the country, and which fuse our generic politeness with piousness, are only superficial. What makes up the minds of the people is a gelatinous mess of referents and images, torn from foreign pop cultures, which metamorphose into monsters. This monstrosity is omnipresent in the art being made at the moment, but it's usually sublimated into something slightly less terrifying than the Muppets. A few escape the trap. 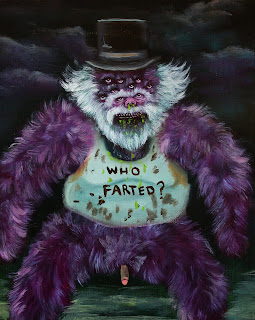 Joe Becker's imagination trails into the more amorphous territory of these corporately created legends. It's a space haunted by horror movies and the children's television of the 1980s. However, there's nothing like the heroic and musclebound Aryan Prince Adam of "Masters of the Universe," that strange symbol of an idealized cosmopolitan whiteness. (When Prince Adam would turn into He-Man, he would get a tan. In Canadian art terms, He-Man is basically Lawren Harris. A trip to the savage land - the terrestrial manifestation of the unconscious or the transcendent - to bring back inoffensively abstract tourist mementos that can eventually be turned into ads for alcohol: the thing that helped destroy the 'savages' in the first place.) There isn't even a sign of anything so romantic and idealistic as Wun-Dar, the so-called 'Savage He-Man,' a murky figure with dark features who was a kind of evolutionary predecessor to Prince Adam from the land of Tundaria. Instead, what you get with Becker is a murky world of caves, giant rat-like creatures and ghouls who appear to be oleaginous wrestlers gone to seed.

It's work that comes directly from the experience of living in suburban or rural Canada, a world which exists, and even in the 80s existed, largely in the Imaginary. A world where empirical life is just a feedback mechanism for the reproduction of electronic icons. The mining of this territory benefits enormously from an apparent lack of consciousness or concern for the matter. Few other artists working today deal so well with what it is to be a product of this morass at this point in time. Unlike Diana Thorneycroft's pastiches of Canadiana, they are not a reflection of how we try to package and project ourselves to the world, but of how the world has penetrated us and infiltrated our minds. Her works are a little too deliberate to be genuinely evocative, while his work comes from the nauseating ether of the country - a space saturated in trashy TV, nostalgia and the general decay of society. As Thomas Hobbes once put it, images are the decay of sense, and Becker's images are the festering residue of the sense and sensibility of this society.

Two major painterly influences inform his work: The tradition of Flemish genre painting and the works of Neo Rauch. The Flemish obsession with the everyday, and the goriness that constitutes it, is present, torn out from it's common manifestation as the ordinary. Likewise, Rauch's sense of gliding through socio-historical tangents is also present, only relayed through the historical amnesia that constitutes the Canadian sensibility. What should be noted here is not simply the matter of influence, but the fact that the former's influence was also of cardinal importance to the history of Canadian painting. Most of the painting that fills the canon of eighteenth and nineteenth century art in this nation comes explicitly from the attempt to emulate Flemish genre painting. Among the first major images of mythical Canada were Cornelius Krieghoff's attempts to re-create this tradition in rural Quebec, albeit in a softened and highly sentimentalized manner. It's in light of this that I see Becker's work. No doubt unintentionally, he has managed to turn the tourist kitsch of Kreighoff upside down – the shacks of the habitants are no longer jovial bastions of saccharine familial bonding, but fetid, nightmarish swamps. 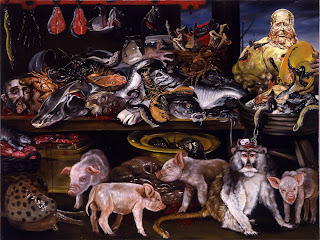 Becker's work may seem childish, but such schoolmarm's complaints miss the substance of the work. Canada is an adolescent nation, in spite of the fact that its elites have striven to become adults, that is, to become responsible corporate citizens. This is one of the reasons that the country has long been simultaneously acutely conservative and yet completely perverse and potty mouthed when it comes to much of its cultural output. Canada is less like any other nation than it is like the FOX Network, only with lower production values. Becker's figures are formed from the fecal matter that constitutes contemporary Canadian consciousness. While this situation is true for all of us, he has the integrity not to pass shit off as chocolate. Such a possibility is an explicit point of mockery: His most horrid characters shit rainbows. He is, probably, one of the most realistic painters of our lives. 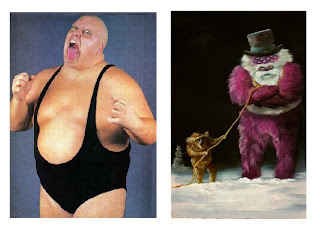 Unlike his earlier, art history obsessed works, Becker's recent stuff uses a more banal set of resources as a springboard for his development of images. These are altered through a deep-seated sense of the teratological. Shit and monstrosity go hand in hand as the predicate and excess of Being. One could attempt to find meaning to accord to the creatures in his zoo – to Black Simpson and all of the social pathologies he calls upon, or to his hairy, possibly hermaphroditic creatures with their benign smiles and sagging tits – but milking significance out of them would be a mistake. Monsters are not abstract nor are they conceptual. The concrete is only possible through the monstrous because it is the base from which it is is formed. It's a symbolism which is not representational or socially meaningful. Both of those things are too scrawny and easy. The monster is the figure of nothing, that which exceeds the possibilities of human comprehension; it is the threshold of the concrete. It represents nothing and signifies nothing: It is a pure paradox, much like Canada, the multi-cultural culture that legally and morally defines itself as having no culture. The only authentic art this country could produce would be one that shits on the possibility of what passes for communication. Of course, it is precisely such an art that has been institutionally excluded. 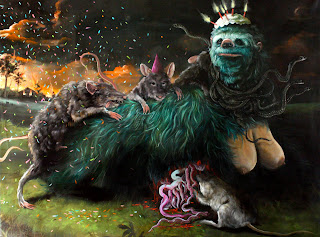 Becker isn't alone in this teratological approach. Shary Boyle works in a similar vein but self-consciously and analytically, domesticating the monstrous into the digestible, while dozens of others use it for far more sentimental reasons, largely as a means to personalize the pop culture fad for horror. What sets him apart is how brutally naked his work is, how reluctant it is to be subdued by communicating or offering respite. Instead, it retains a visceral punch. There may be laughs, but they aren't the comforting kind. Even with his notable technical acumen, it's the brutishness that wins out. A lesser painter would simply get sucked into technical prowess but he lets ugliness override it. He seems to recognize that ugliness is not only more complex aesthetically, but that it rests closer to the truth. 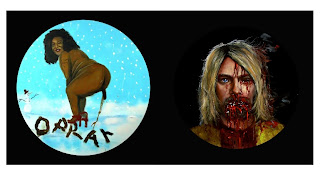 Ugliness is matter excluded and rejected – the base of everything, the stupid excretory essence of life – but beauty is simply a tangential policy in the service of idiocy fetishisizing itself. There's mockery of this for sure in Becker - whether of the cults of Michael Jackson, Justin Bieber and Oprah, or the condo friendly art of the Angell Gallery – but there is no point of contrast or self-delusion to make it satirical or moral. Rather, it's a venomous form of class hatred, one which parodically deforms everything in its path. This is true whether it comes in the guise of his small and crude paintings or his larger works which seriously emulate the traditions of the old world, using them as a polemical knife against contemporary fashions and taste. These gross caricatures inhabit the decomposition which constitutes our lives. Although he places his cast of characters in a theatre, they are never given an explicit narrative, merely acts which tend to be sacrificial attempts to abort continuity and which barbarically refuse the sanctity of commonsense.