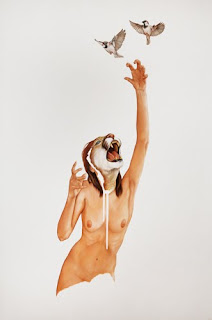 Amanda Nedham, Brian Donnelly and Nader Hasan
The fur trade created modern Canada, but for most of the country's subsequent history it was not the wilderness but the farm that formed the backbone of experience. In each instance, the vicious farming and brutalizing of creatures was essential to the economy. It didn't start with the white man, of course, it started long before that, but it was only with the establishment of modernity that it began to reach the industrial extremes made possible by technology. As Isaac Bashevis Singer once said – to the animals, we're all Nazis and the earth is an eternal Treblinka. One could define the history of Canada in three acts: the wild animal, the fur shoes and the lapdog. You can even add another act – the dog that wears fur shoes, a manifestation of cultural dementia that can regularly be seen on city streets. This is the moral essence of Canada.

Animals as a rhetorical device have become a commonplace over the last couple of years. It's not a phenomena isolated to Canada, or even Toronto, but it seems especially dominant here. Anthropomorphism is readily fed on the vagueness of urban life where things get thin and a little too fluid. It gives things back a little meat on some level. All the same, some artists I've talked to about it have worried that the whole thing is just a stupid cliché they picked up in art school. It's certainly a fad, and one that can be readily marketed and sold by galleries given the nation's cultural history, but is there more to it? This year it saturated much of what was on display and the variance in meaning generally wasn't that great, insofar as one can say that they have any deliberate meaning.

Anthropomorphist tendencies run deep in Canada, from aboriginal culture to "The Raccoons." It's something that could be mistaken for quaint if it weren't so profoundly pathological. This isn't the place to rehash the already familiar arguments about Canada's frequently acrimonious role as predator and parasite to nature, a relationship that has caused a range of neurotic manifestations from the work of Margaret Atwood to David Cronenberg and on. It has always been the fate of this country's culture to celebrate what it destroys and lives off of. We are a nation that happily wears the faces of our victims like a mask. Animals, like the land and the natives, are another part of that. It's usually the environment that animals live in that gets talked about. It's vaguer, therefore, easier. Plus, we live there too. Landscape dominates early Canadian art. Animals have been merely accessories for the most part until relatively recently, precisely when they, and the landscape, began to recede from easy view. It's not that naked bodies of dead and suffering animals aren't familiar. They're everywhere. Indeed, if you look at a lot of Lynne Cohen's early body of work, they are basically the wallpaper of Canadian culture. 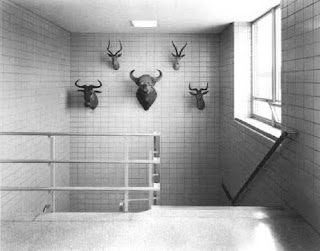 This somewhat stuttered preamble leads now to a slightly more concrete set of examples from the past season. The first is the set of paintings which Brian Donnelly had on display at the Show & Tell gallery. The majority of them were done in portrait format, the figures rendered in close to a one to one ratio with the viewer's body, set on the wall close to their gaze: face to head. Generally torso and head with an awkward pose, they were sometimes fleshed out to full body pinup pose. 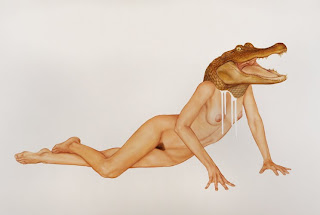 Donelly's work is sensuous in a way that pure surface can be (the hair and fur in his pictures glitter), but it's an objective kind of sensuality. There's something cold and lacking intimacy; instead, there's glamour. The works of Amanda Nedham which were on display that the LE Gallery don't have that. Instead, they are smeared with the intimate, almost to the degree that it becomes performative. Her graphite and watercolour pieces depicting animal-product hybrids are never stark. There is an excess of detail, but this is often smeared, sometimes within the figure and sometimes extending out. The mark of her fingers are everywhere, but unlike the still apparent pencil marks in Donelly's paintings, her markings are to delineate a different kind of territory. They are performances of a specific form of tactile investment and of the pleasure taken in the deformation of material. If his work shows a libidinal vacuity in the interface with animal life, her's shows a pervert's enjoyment. 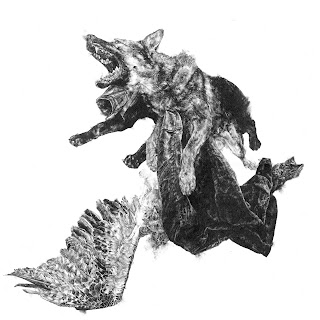 This performative aspect is completely different in her sculptures, which have the sense of inventive Halloween party installations. Like Donelly, there is an enormous amount of morbid humour in these images. Her works are even more playful and call upon art historical references from classical sculpture to Baroque art. But that doesn't change the fact that this humour, like most humour, comes from the tripping up of expectation, from the needling of the cliché. Rather than to snap off this though and push somewhere, the move bounces back. Humour, to paraphrase Mark Twain, is the admission that humanity is innately pathetic. Laughter is the defense mechanism of the ego. This narcissism is doubled in these works. You get not only the pathos of the blatantly human but the anthropomorph as well. Laughter is the giddy form of violence.

In both cases the figure is sewn together. The seams show; there isn't a harmonious synthesis but a humorous one. It isn't some Donna Haraway inspired hybrid; there's nothing that optimistic at play. Instead, there's monstrosity, in both the literal and figurative sense of the term. There's a kind of horror show being played out. Donnelly's figures can be seen as masked. They are uncomfortably positioned in the space between being human and becoming an animal, which is to say, realizing their animality through the loss of subjectivity (the face) and the taking on of the head. But it's a stunted move. The figures never get there. They're aborted and the head is just suspended over the face, still dripping with the foreign territory that hasn't managed to take over. There is still a surplus of humanity present.

Nedham's work also deals in this excessive humanization. It's less a question of sympathy with the animal, than it's anthropomorphization. When an animal is made to suffer, it is to elicit the response of human suffering. In other words, empathy, or narcissistic masochism. The figures are traps. In a very literal sense this is how they are presented. The creatures are captured and torn open as if by the devices of fur trappers, then ripped apart and sewn back together as mutants. They become isolated in pale spaces like Donnelly's creatures. Although without the glamour of them, they share in their enforced boutique quality. They are made victims to fashion. This is, after all, the purpose of the gallery, to sell these images of torture to the middle class to decorate their homes or to be resold at increase. The shock they illicit services this sublimation and its erasure of the screaming earth that we live on. It's a dominatrix routine. 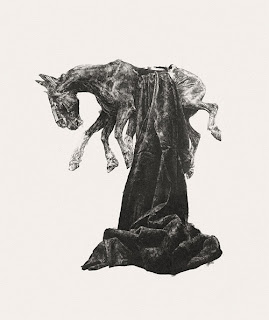 But isn't this overloading things? Aren't these really just concentrations of camp? A pastiche of some of the most blatant and often farcical elements in the national imagination? In both cases, they can be easily fetishized, as any overview of the articles written about them will demonstrate for you. They have an accessibility. Even their particular humour is redundantly Canadian, a kind of comfort. In Nedham's case in particular, the obsession with her craft work underwrites everything. This is part of the attempt to redeem the work, to make it more humane in a sense by insisting on the subjective value of the artists and the aesthetic experience of the viewer. 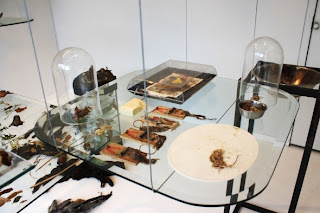 The cult of craft is the easiest way to ignore actual content. It was in light of this fact that only a few blocks from the two shows being discussed, Nader Hasan, whose practice relies on an avowed attempt not to aestheticize things, put together a work that consisted of his collection of road kill, burned and defecated money and taxidermied cats. All elements were carefully set on little glass display trays suspended in the air in the windows of the Whippersnapper gallery. All of these floating corpses, dessicated and therefore no longer even meat, just items, suggested both certain Tibetan burial rituals and a trip to the pharmacy. In either case, what you had was a public display of morbidity. Nothing reminds people more that they are part of the natural economy of decay than having death placed before them, but while the spiritual dimension was lacking thanks to its casualness, its lack of demand, what was magnified was its alienation effect. There was a specific kind of objectivity to the work which was largely absent in the others discussed. Although any of the elements present in the piece could easily be found in the area outside of the gallery, highlighting them in this way made them seem precious, almost like boutique items. The only contagion the work offered was in the form of a distant display, a pseudo-iconic status for the dessicated that removes death one more degree, freezing it in time; in effect, rendering it as a set of cleanly delineated objects for speculation. This was a different kind of anthropomorphism, one which presented material life as a museum and, largely undeliberately, layered it in the rhetoric of anthropology and the aesthetics of window dressing.

But is that closer or further away from the beast within us all? While any of our views are invariably tainted by our subjectivization, there is still animality within us, a materiality which is ultimately more important than the banalities of subjectivity. Perhaps... although that may be too romantic as well.