Shary Boyle: Flesh And Blood At The AGO 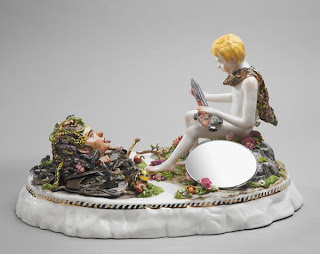 Shary Boyle has just unveiled a substantial exhibition of her paintings and sculptures at the Art Gallery of Ontario. "Flesh and Blood" was curated and organized by Louise Dery and Galerie de l'UQAM. It will be travelling the country over the next year. Most of the work on display is new and was created explicitly for the show.

The exhibition is spread out over four rooms and encompasses a wide range of her trademark images. Combining characters from old fairy tales and the cliches of our times, she channels her figures into a highly personalized mythology, stripped down to their symbolic nudity and condensed in a way which makes their significance elusive while their libidinal presence is explicit. She then decorates her pallid figures with jewels taking the form of vomit, blood, excrement and other bodily fluids. The distinctions between bodies are often unclear. Copulating bodies collapse into each other, sometimes in pornographic detail, sometimes by sheer vagueness. Most of her figures are small and porcelain, or polymer and clay, with some elegant nuances of detail and others that seem more like punctuation marks. These curious objects would seem at home on my grandmother's knickknack shelf if it wasn't for all of the monstrous sex. Others, like the scarecrow and figure copulating on a haystack, seem more like frozen moments from a forgotten Ken Russell film. Meanwhile, dotting the walls of some of the rooms are her charmingly twisted paintings, notably the "Highland" series which depicts the kinky exploits of various highlanders and exciting new uses for plaid. They are interspersed with minor Rococo paintings and the work of Frans Snyders, harmonizing with the show's general tenor of a particular kind of bourgeois nastiness. 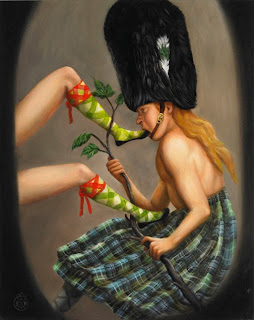 Such a front and center exhibition at the AGO for a relatively young Canadian artist is pretty rare. Aside from the fact that Boyle has actually decided to stick around in Canada, she manages to embody a lot of what's been going on in the art scene in this country, although always in her own very particular way. On the one hand, she embraces a rigorously theoretical, political and conceptually based practice. On the other, she displays a disciplined enthusiasm for traditional craft work. Although one can often find these two tendencies at odds, either polemically or in market terms in the works of many, they are perfectly melded together in her work.

When looking at the intricate and delicate details that are apparent in so much of her body of work, it is easy to forget their extremity, to ignore the fact that these are aesthetic celebrations of actions more macabre and violent than what is commonly found in slasher films. Casting such imagery in stylized porcelain figures distances the actions they display from their shocking character. It isn't shock art, it's more circuitous, more seductive and in many respects, more successfully erotic. Porcelain is a hard medium, both in terms of craft and tactility. Yet, in no small part because of its longstanding cultural marginalization as part of feminine culture, whether in the sculptures of the Rococo or in the dolls of the Victorians, it creates the illusion of softness, of gentility. It is precisely this, historically misogynistic, misunderstanding of the medium that she exploits in her work as a vehicle to examine the constantly collapsing boundaries between the carnal and the carnage of history. 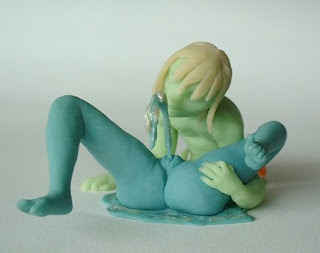 It isn't for nothing that the pale figures which populate Boyle's work only seem capable of registering as creatures with physical processes in colour. Falling from their metaphysical grace into the carnal world of colour, these lose their whiteness as they merge with a world of shit. Their excretory functions are pungently hued and transformed into jewels. The Freudian, and for that matter Bataillan, aspect of this scatology and its commentary on the value of culture is hardly subtle.

Much like fellow Canadian Marcel Dzama, she engages with history on the level of the voyeuristic and fantastical. However, it is never either of them that act as the voyeur in their phantasmagorical recasting of our continent's gory colonial history. Rather, they act as the distanced surveyor of a society that seems incapable of recognizing its own viciousness in itself, which pushes it into more monstrous and ludicrous cultural forms as much as into ongoing wars of imperialism.

One should be careful when recognizing the political import of the works though. While they are blatantly political, it is never in a sloganeering or polemical sense. In fact, certainly in the case of Boyle, it may be in many respects far more ambiguous than intended. What differentiates them both is also substantial. While both of their works concern the often repressed genocidal impulse and history which has dominated North America, the rhetorical, and ultimately political cast they make of it is decidedly different. Dzama very consciously affiliates himself with the radical avantgarde of the turn of the twentieth century but filters it through Outsider art to arrive at a specifically nuanced attack not only on mainstream art, but mainstream society at large. For her part, Boyle, while embracing the traditionally feminine, is also embracing the more radical aspects of the Rococo tradition. In doing so, she touches on the aristocratic and distancing from the social majority. 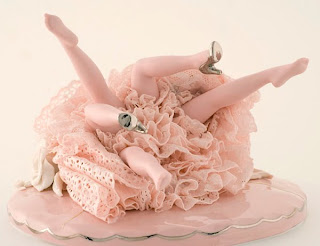 The soft and feminine has a long history as the subversive, long before feminism would claim it. Even for the ancient Greeks, the soft was regarded as a passage into decadence, a moment when the swing to tyranny would occur. The dread accorded to it has continued well into our day, along the way explicitly coming out in the polemics of the French and American revolutions, which were resentful wars against a coquettish softness, as well as in the battles of the fascists and the communists against the enemies they claimed. While nothing has ever been less militant that the soft, nothing has ever threatened the solidity of social and military power with as much violence.

What is truly subversive in the exhibition is the deliberate pleasure which Boyle cultivates in the spectacle of this violence. One of the most interesting things about her work is the way that she, to use an old phrase, 'aestheticizes violence'. They're sadistic pieces cast in a radicalized softness. The exhibition isn't simply about a bunch of tantalizing or shocking objects; it's more about the audience that filters through the porcelain world she creates. In fact, the use of porcelain is achingly appropriate since the work is about the repressed asshole of human consciousness and society, which reaches its most sublimated form in the institution of the museum. It is here that Boyle plays an openly perverse game and her subversiveness comes to fruition. The museum goer is oriented less as a viewer than as a voyeuristic sadist who can't help but enjoy the scenes of rape, torture and mutilation as they are played out with a coquettish viciousness.

*Note: This is the somewhat extended version of a review originally written for BlogTO
Posted by Malakoteron at 3:21 PM