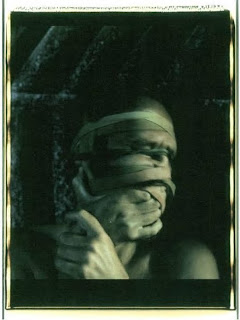 '...the Canadian psychic landscape, as revealed in our photographs, is psychologically akin to that of an anorexic adolescent, and that Canadians unconsciously consider themselves to be both "feminine" and stalled in a rite of passage toward autonomy as a nation.' (7) That's the thesis of Faking Death: Canadian Art Photography and the Canadian Imagination, a rather ambitious book by Penny Cousineau-Levine. It's a troubling book and one that's deeply flawed, as interesting books so often are. Its failures in many ways say almost as much as its successes but it is essential reading for anyone who takes photography in this country seriously.

Cousineau-Levine analyzes some of the most recurrent motifs and themes to haunt the imagination of Canadian photographers (and writers). These include frequent depictions of crucifixion and bondage, effacement and encasement. All across the photographic landscape one can find the capture and torture of animals and destruction of nature, a procedure which is mirrored in the photography of artists, whether in the garb of BDSM or in far less theatrical states of ritualized masochism. Quite persuasively, and through a substantial cataloguing of work involving dozens of disparate artists, she builds up a case for the imbrication of death within all facets of everyday life, for the saturation of visual spaces with wounds and openings. It isn't death in an obvious or documentary way, but death as the general experience of existence, a blurring process that makes the delineation of life in opposition to it seem almost impossible (although Cousineau-Levine still seems hellbent on making the distinction).

What does all of this mean? She argues that it translates to a photographic culture which is remarkably unique in the world; one that, in spite of superficial resemblances to American photography, is completely different. This difference comes from the wrenching away of denotation from content. Instead, all images become connotative, that is, they become the traces of a metaphysical activity, rather than of a simple physical presence. There is always a disjunction between what the image shows and what it actually represents. The Canadian subject is always cracked. That is true in a more general way for other places too, but the myth of a frontier with an outside has never been terribly successful in this country. There's very little surface to get to and no escape is really possible. Such hallucinations are almost inevitably realized as such, though even this bit of rationality might not go far. She realizes this. She even quotes Northrop Frye: "...the apparent irrationality... of having two incommensurate accounts of every entity, both true, both exclusivist, dissolves when one perceives that the anomaly is not local, but rather the expression of a condition of being, and hence itself a principle of rationality." (121) 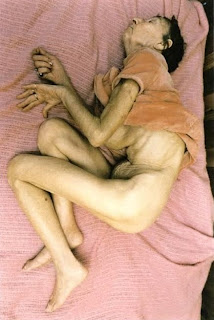 The diathetic that Frye speaks of is between the radically conservative (aristocratic) and moderately conservative (democratic) tendencies that have underwritten Canadian history and political thought. Rather uneasily, she migrates this scheme onto a contrast between the masculine and feminine principle in Jungian psychoanalysis. It's a useful choice for a feminist argument, and certainly comes with a radically different result than if she'd chosen to read things through Melanie Klein, but the result is that she often ends up conflating the imaginary feminine realm with actual femininity when the two things have virtually nothing to do with each other. One could also argue that the break from American style docurealism which is used as a surface and then perverted, is actually because the connotative function is ultimately more realistic since it does not rely on a specious dualism. Death is imbricated in everything in Canadian photography precisely because that is in the nature of material life itself. Symbolism has little to do with it. The illusion of division constantly slips away, in itself undermining the essentially dualistic (feminist) stream of arguments that she's making.

One of the things which the book ends up persuasively arguing is that these dualities aren't actually possible, that they are imported after the fact as readymade categories which constantly flunk when applied. People don't live or die the same here or anywhere else. But neither she nor Frye manage to find a more productive way of dealing with this, in no small part due to a reliance on certain unfortunate linguistic and symbolic forms and by virtue of the fact that they are both engineering what amounts to a colonization campaign. Many of the problems that they introduce as a result come from the misapprehension through language of a set of material phenomena and a course of production which is at odds with the obsessive dualism that haunts Canadian studies. To her credit, however, she does map out a great deal of what is at stake on a practical level and on the level of the concrete. All of these metaphysical gestures, after all, have a distinct strategic importance, even though one might hesitate to say that they have a specific goal in mind. 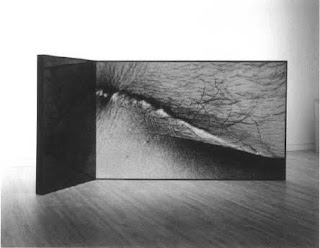 This strange diathetical situation is often mistaken for an inherent tendency to the pluralistic, but it isn't. Each culture is, in itself, singular. The misapprehension of this leads to a unique kind of humour, but not one which realizes the problematic of the situation and instead relies on irony and parody. Like all forms of humour, it is triggered by an inherent conservatism, one which assumes a divergent posture to mock another divergent posture and ensure the wall set up by the centre and its 'entombment' of the subject, as Torok would put it. That's not a new trick, of course, and it is, frankly, easier than trying to think of something in a more positive and unilateral way. To imagine that the passage between opposed positions itself is a goal is to miss the point. The point is the negation of that goal: the abortion of passage in the service of sustaining flight.

Art brings to light what is infantile in the ideal of being grown up. (Adorno)
'Most Canadian art, has been created on an almost entirely unconscious level. One can only begin to imagine what Canadian photographers and other artists might accomplish once these layers and subtexts are brought into conscious awareness.' (19) This aim is part of where she starts to get into trouble. It is her attempt to, as she puts it, 'depathologize' (55) the Canadian unconscious and orient the culture that it produces in a more progressive and utilitarian fashion that continually distorts the evidence. If it is true that Canadian culture is an orphan culture, not desired by its parent nations, martyring and running from its feminine element and refusing the role of the father, there's little reason to assume that the situation can be rectified by an appeal to mommydaddy. Likewise, there is little reason to desire it, however much our culture has institutionalized its femininity as a strategy of differentiating our cultural production line ('...it has become a commonplace of Canadian cultural criticism to assert that Canada is feminine, often because of the marginal position shared within Western culture by both women and Canadians.' (175)). This strategy, embodied by the likes of Margaret Atwood and Joyce Weiland, is part of the reactive formation of identity in Canada, an attempt to cling to a Good Object. It is from this depressive position that the dichotomy itself is viewed and understood, and in light of which statements like these should be read: 'Once we recognize the nature of the liminal, "other" world to which our images refer, recurring characteristics of Canadian photography that appear to have been without signification fall into place, and reveal themselves as indications both of a way through a stalled rite of initiation and of the mature role that awaits us as a nation.' (174)

It is not a rite of passage though, at least certainly not one to some mythical feminine realm. Canadian artists may well have been on a flight from daddy, but mommy certainly isn't any more appealing. That would be too easy and what she has to offer, the mythical happy ending which the author proffers, isn't any better. It isn't even that it's a transsexual space that the artists create, it's just an ungendered one, perhaps one as sterile as the arctic. It seems to be a problem in our cultural criticism to constantly pose our national issues in terms of duality. It is part of the reactive position to deal with the incompossibility that is essential to the country in this fashion. Canada has always been an other world that never came into Being. There is no need to imagine alternatives, but only to look for what is immanently present. This is what the cultural industry largely attempts to avoid. 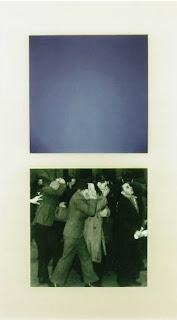 'The symbolic death to which adolescents undergoing initiation are subjected always includes a period of separation from the mother, during which the youths are considered, and consider themselves, actually dead, or to exist in a sacred, ghost-like space between life and death.' (158) Such a space is everywhere from Jack Chambers to Roy Arden to Evergon. The former and the latter make it the most explicit: Chambers in his theodicy, Evergon in his homoerotic enactment of shamanic death and re-birth rituals. In Arden it fills up the space of the social rituals and detritus of the banal. But, again, it isn't really a rite of passage. They are all too unilateral for that. Rather, it's a process of dissimulation, much as the frequent taking on of documentary aesthetics to revel in the symbolic is. It isn't a passage that is enacted, but the abortion of passage through the renunciation of dualism, a move which is at the heart of all of those artists. While this can be read negatively, it should be remembered that the space from which this defensive act is being conducted is the space which the imperialistic adult world defines itself negatively toward.

One could read it all another way. Is this a faked death? If so, what is this programme of dissimulation in the service of? It could be serving the essentially conservative and reactionary nature of the country, as if the nation's superego were so deeply embedded in the work of artists. This may be according the arts in this country, marginal as they are, far more significance than they actually have. In light of this, one could say that this faked death with its ritualized masochism is part of art's celebration of its own castration and its performance of a kind of abjecthood for the moral betterment of the bourgeoisie. One could go even further in this rather depressing direction... Or, one could say that it is a real death. That all of this is a function of the death drive and that our culture, if it has a will or drive of some kind, has one for a certain sort of sterility, one which is mirrored in it political conservatism, albeit one which is compromised, much like art in the market, by capitalist neutralization.

Canada is a land of orphans and abortions and it may well be true, and likely to our credit, that on some level we tend to persist in this, in resisting Being and rejecting both the pathetic fallacies of the feminine world and the staunch world of the masculine. Both of these options are still too rigid, too Oedipalized, and it's for that reason that they've served as such dominant factors in the study of our culture. This is not to say that these traps are not constantly fallen into, for they are, often resulting in a string of paradoxes, some more productive than others. But even these 'failures', as Atwood might put it, that other great category of Canadianness, demonstrate the material facticity of the world in the nudity of an act of artifice. These abortions are the actual programmes of art. 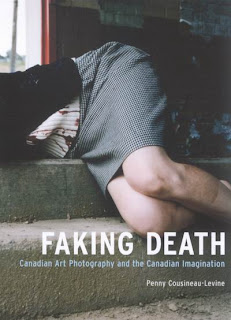 Posted by Malakoteron at 9:01 AM