Douglas Coupland's Welcome to the Twenty-First Century at Daniel Faria.


The Dreams Of The Twenty-First Century's Microserfs.
Although the works fall under the header of the Twenty-First Century, what they examine far more specifically is what that means in Canada. If nothing else, the works are specifically nationalist in character, if not necessarily patriotic. To peer at the Twenty-First Century, Coupland uses technical banality as a glass to reflect on the past.
Not many current artists are doing the kind of art as national history that Douglas Coupland does, and of which John B. Boyle was probably the last great exemplar. Coupland isn't as polemical as Boyle, of course, and he often seems more ambivalent about what he's doing.

Modernism in Canada couldn't move quite the same way as anywhere else because the country was, as Jack Chambers insisted, automatically divorced from art history (a). It wasn't just that it was a backward country, but that it was already ungrounded. Canada didn't need urbanization to gain social alienation or up-rootedness. Urbanization, rather, evolved as the suppression of alienation. In Europe, and even in America, modernism was a reactionary phenomenon predicated on an obsessive redemption of urbanity. Even in Canada, where early on it took the seemingly much more unusual form of the cultivation of landscape, it was one which would only have been imagined by city dwellers. The Group of Seven, as has been argued, were essentially a set of tourist industry illustrators painting cottage country and ignoring both the peoples it dispossessed and material destruction it was predicated on (b). The depopulated wilderness which they projected was actually the vacuity of the rising urban centres.

The connection between abstraction and imperialism, with its basis in landscape, is hardly a new observation and has been amply testified to. Lawren Harris is the textbook example of this. The distinction isn't formal so much as political. The landscape, vast and depopulated, is virginal, pure and can be taken. The abstract is far more spiritualized, more pure, and following on the promises of both Kandinksy and the Surrealists, a campaign for the absolute colonization of spaces: microfacism, microserfdom; 'Materiality' rendered into decoration. This has taken very different forms of course. In Quebec, it had the role of a fairly radical anarchism, but in English Canada, specifically Toronto, it has been almost purely conservative, even provincial and reactionary. 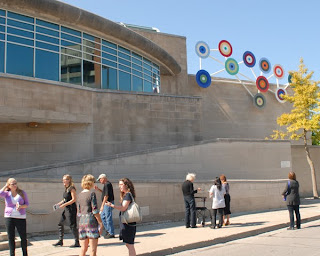 Only a few months ago, Coupland celebrated Painters Eleven with a monument at the McMichael Museum. Based on a famous portrait of the group, it transformed them into Tousignant-esque cosmic bubbles suspended in the sky. A little constellation of elite living room decorators. Reading P11 according to the normative modes of abstraction and the various mythologies about its radicality makes little sense. As William Ronald himself insisted, what they were doing, or in his case consciously doing, was creating Pop art. As he said, he was more Warhol than Warhol. Abstraction only came successfully to English Canada as a kind of exotic pop culture phenomena that could be used to decorate the homes and offices of cosmopolitan imperialists. It remains to be seen whether this is still the case or whether there's anything more substantive to it. By and large, the difference consists of the fact that it has become even more superficial than it once was (for a case in point, merely examine some of Town's later paintings in contrast to those of Bradley Harms recently displayed at the Angell Gallery). This is to say that the infantilism that modernism involves was always different in Canada, the perpetually adolescent culture. In the case of abstraction, it is America as mommydaddy and the borrowing of their trade in abstraction has been like a tween dressed up as a tart.

Coupland's new show at Daniel Faria is packed with allusions to Canadian art history. He plays with them as a means to investigate the changes wrought by technology on the Canadian imagination and its various cultural manifestations. What Coupland is obviously aware of here is the same thing that his hero Marshall McLuhan spoke of so frequently that it was generally ignored. Technocratic society is a procession of alienations from physical existence. Materiality becomes a matter for tourists who are no longer in touch with their own bodies. The aestheticization of the world - through landscape, abstraction and the tourist industry - is all part of this process of amputation, self-castration and horror for the base nature of physical life. Such a nihilism, as George Grant would put it, has been especially significant as a marker and constituent of the Canadian mind for the past fifty years, is still present for Coupland, even if it's become invisible for the majority of the younger generations. Like McLuhan, he attempts to save himself through an insistence on some sort of spiritual redemption. At least in his novels. In his visual work, redemption is always a lot further away. It is rarely believable in his writing: it's a weakness. However, it's nearly absent from his visual work, and hardly missed. The coldness of his work wins over. 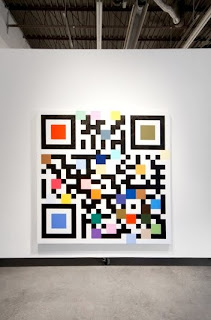 They aren't optimistic paintings. In spite of how clean it all is, it's actually one of the bleakest art shows I've ever seen in Toronto. This marks it out as different from his earlier experiments with the same kind of work. In those there was a playfulness and humour. That was partly a matter of colour scheme, partly a matter of the choice of source material. There was a poster style directness and excitation in his adventure with Emily Carr, but these new pieces are stark and brooding. There's something bordering on rage, even if it's the sort of rage you would find in a Zen monk (but what kind of monk could find Zen without rage to begin with?) They look like quilts by design, but even more like carefully depersonalized paint-by-number renditions of canonical Canadian landscapes. One might recall Warhol's "Do It Yourself" (1962), but Coupland isn't just joking here. This isn't ironic. There isn't enough distance between things. He's mashing them up. The fusion of the abstract and nature are explicitly played out here. He isn't mocking it. He probably loves these things. Maybe he's even trying to be optimistic, but it's dubious. This is brought out the most by Coupland's reference to Jack Chambers' mysterious piece "Tulips With Colour Options," one of his polemical works aimed at extricating Canada from the illusion that it was part of a global art (and in the 60s, this was certainly a tenable argument). Of course, there aren't any colours in Coupland's "Arctic Landscape Fuelled by Memory." It's all grey-scale. (Also worth noting: the obsolence of Euro art in the earlier work is here replaced by Canadian work.)

The degree to which a society is technologically advanced signals, precisely, the degree to which is has been militarized. McLuhan writes of this unequivocally, spelling out the fact that a peaceful society is, in effect, one which has been totally militarized to the point that civilians no longer exist (c). Technological innovation is the melting pot for this fusion of the civilian and the military. The result is not the kind of brute fascism of the early Twentieth Century, but something far more dangerous and more genuinely totalitarian. It is this disappearance of civilization with the rise of technologically advanced capitalism that sticks at the back of the works. This may sound over the top given the playfulness of the show, but Coupland's humour, like that of everyone else, masks a propulsive dread. Each of the slogan paintings functions like a joke or pun. His wall of slogans are genuinely funny precisely because they are repulsive. It's the humour that marks the indexical point for any deep seated pathology. 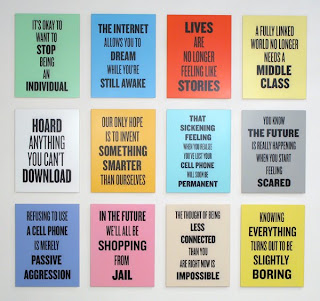 In other works, playing off of the grids of Mondrian, Coupland renders them as the QR codes of cell phones - those totalizing markers that map and grid over cities, states and the globe. But beneath the carefully taped and gridded patterns in primary colours and deep hard blacks, the white background is far from smooth, its brush strokes are actually aggressive, even a bit brutish at times. Mondrian could pay homage to the city as a sign of progress, but new technologies make urbanity itself irrelevant and outmoded as digitized interconnectedness leads to an excess of subjectivation and a collapse of space. This is what many abstractionists sought after all. For Guido Molinari it was the collapse of figure and ground into one plane that was crucial. He thought this would open up to a departure from anthropocentrism, but it's only led to an excess of it. If the space of landscape has been abstracted into mere design, it is because the technological logic of the world had destroyed outer space and reduced everything to internalizations. While this provides the ego with the illusion of significance or control, it remains the case that they become merely, as McLuhan quoting Samuel Butler puts it, 'the sex organs of technology.' Human subjectivity becomes simply the excretory byproduct of technological reproduction. Cell phones are an instance of this decorporealized fucking that demands absolute attendance. Coupland rings it up in what a cynic might regard as a caustic mockery of Rouseauistic social anxiety if it weren't for the fact that he shares it, at least on some level.

Douglas Coupland's Welcome to the Twenty-First Century at the Daniel Faria Gallery from January 26 - April 7.

(a) Chambers in Perceptual Realism.
(b) See Watson's Race, Wilderness, Territory and the Origins of Modern Canadian Landscape Painting and Jessup's Bushwhackers in the Gallery for two treatments of this.(c) McLuhan's fullest articulation of this is in War & Peace in the Global Village, a text which provides the most explicit key to the socio-political problems in McLuhan's thought and which is almost inevitably not seriously engaged with by anyone analysing his thought.

Posted by Malakoteron at 4:38 PM