The past decade has seen photographer Diana Thorneycroft delving into the icons of Canadiana. Her shows travel the country and have even popped up in Paris at the Canadian Cultural Institute as "Caustic Landscapes of Canadian Imaginary." The tableaux she creates feature everything from the Group of Seven to the Trailer Park Boys and Don Cherry, generally engaging in brutal acts which parody the sensibilities of Breughel and Mack Sennett. While the souvenir shop items which populate her pictures don't exactly make up the Canadian psyche, they're a big part of how we package and sell ourselves to the world. Rather than retread the imaginary, in her new series she digs through the more literal history of the country. It's certainly not the popular history of Canada – a country that is world renowned for its hockey and maple syrup, but equally for its kiddie porn. Aside from our massive pillaging of natural resources and export of comedians, those are our essential cultural products.

Canada has always had a Walt Disney World approach to culture (or multiculturalism), something which is mirrored in Thorneycroft's images with their smooth and brightly saturated colours as well as their compact and densely populated decors. Quintland, featuring Disney stars the Dionne Quintuplets, was, in many respects, the most truly remarkable piece of public art ever made in Canada. It was one of the unique cases where human beings were raised explicitly as cases for public display, sometimes visited by up to 6,000 people a day. Grown in a strange, enormous boutique in an isolated community, their lives were scrupulously documented in films to be shown around the globe while all of the objects they touched instantly became artifacts in an ongoing national archeology programme. If anything really broke down the barrier between art and life in the twentieth century, it was this experiment which sought to seamlessly assimilate life to museum culture. Perfectly selected among the travesties Thorneycroft re-enacts, it provides the key to what these works are examining. If the Louvre – and modern French culture – was born by looting the rich and exposing their lifestyles as a kind of 'degenerate art', Canadian culture was made modern when it ransacked childhood to invent the prototype for reality TV. 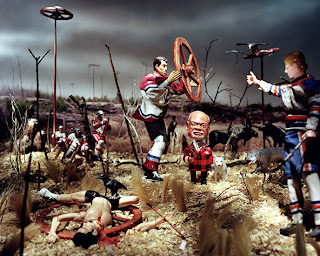 Besides Quintland, there are numerous cases of child molestation at the hands of priests and hockey coaches, child brides in Bountiful, cops murdering aboriginals, a serial killer and more. They aren't mournful images exactly, but they lack the humor that was common to her earlier studies of Canadiana (see directly above). The toy is more of an alienation device (in the proper Brechtian sense) this time, set up to function therapeutically. She instills the dolls with all sorts of pathos and this becomes unnerving, if not altogether successful. The Japanese being interned are all racial stereotypes, though slightly more current ones than those that underwrote the actual internments. It is only this time around that her work really verges on the uncanny (a). But this is important because the banal existence of life in Canada is a lot like Quintland. To extend what Glenn Gould once said of Toronto, optimistically comparing it to Brasilia: its sense of relative serenity springs from how controlled it is, its spirituality from the fact that it was never exactly alive.

If anything, Thorneycroft could be accused of playing it too safe in her choices. At least, this is what I thought at first. There’s nothing of the destruction of unions and exploitation of the poor, nothing of the several foreign genocides and colonial wars we've been involved with (and those we are still involved in) or the massive environmental devastation our economy is predicated on. Rather, the acts she selected, which form a kind of 'family romance' version of history as Lynn Hunt might put it, are depicted as something secretive and marginal. In fact, they are cast as increasingly marginalized, even down to a man (Col. Williams), when they have been a far more molar phenomenon that has implicated the general population. But then again, perhaps this is a wiser strategy. As Margaret Atwood used to have it, Canada is fundamentally a victim culture, although most of our victimhood comes from our own hands. Simply victimizing each other isn't all that our social bond, such as it is, is made of though. There is still, though in ever more repressed forms, the step beyond, to sacrifice. 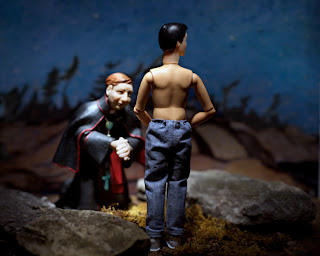 The show is made primarily of images taken from the institutional torture of children that has been a fundamental part of our national character. While we get glimpses of the small pox genocide, Louis Riel, Africville's destruction and Japanese internment camps, the majority of the works concentrate on child abuse of various kinds. The torture of children has double importance here. Not only because everything is depicted using toys and inviting the audience to play with them, in effect infantalizing them, but because both childhood and its violation are products of our corporate culture. For years now, there's been a kind of Kleinian analysis going on in Thorneycroft's work. The viewer has to take on the role of little Dick and find a way to plug their machine into the molar machine of the broader territory. This is what the use of toys placed in tableau against the generic landscapes is there for. However, even as all of the elements in the tableau are assembled, no good object seems to be formed, no good breast provides succor. There's a sense of the poisonous that saturates everything in the very deliberate coldness and deadness that her landscapes are cast as. 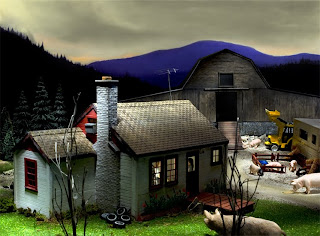 One of her stated goals has been to invite the viewer into the world of the perpetrators (b), to muddy the distinction between guilty parties. But this blurring may have gone further than she intended. The view of the perpetrator is never really taken in – there's too much distance for that – but there is a cold aesthetic pleasure to be gleaned from the inevitable, if highly ironized, voyeurism inherent in looking at these images. Again, it is the uniqueness of Canadian masochism. What the works point to, without any overt consciousness of the matter, is the museum quality of what it presents: a very up-to-date museum where the dioramas have all been flattened like screens. All of these acts being replayed with plastic toys (a folk idiom for an post-industrial society) testify to a kind of arrested cultural moment, one where only the death of a culture comes to count for something. These are the sacrificial acts that have gone to make up Canada where, in our final sanctified perversity, our victims are our martyrs.

A People's History runs from November 5 – December 17 at Art Mur.

(a) Sharona Adamowicz-Clements makes the argument in Diana Thorneycroft: Canada, Myth and History: Group of Seven Awkward Moments that her work should be read along the lines of Freud's unheimlichkeit. While her secondary argument, concerning the death drive, seems fairly accurate, this one struck me as hollow in regards to Thorneycroft's earlier works which are too fantastical to effectively be uncanny.

(b) "The art that was exhibited in “Mirroring Evil” was profoundly different from traditional exhibitions about the Holocaust, which focused on the horrible plight of concentration camp victims. Instead, these artists invited the viewer into the world of the perpetrators and produced work that muddied the lines between “us” and “them”. Zbigniew Libera’s “LEGO Concentration Camp Set”, that encourages his audience to imagine making tiny little gas chambers and crematoria to play with, is but one example." (Thorneycroft)
Posted by Malakoteron at 10:54 PM