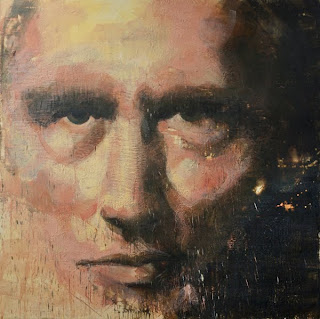 He would be much too dazzled to see distinctly, those things whose shadows he'd seen before.
- Plato
For years now, Tony Scherman has paid most of his attention to Europe, rummaging about in the waste of its revolutions and myths. He's now turned his eyes on Canada to examine some of our failures and cast them in larger-than-life encaustic close-ups. Saying it's about the October Crisis of 1970 wouldn't explain much. That's fine because the show doesn't explain much and it's doubtful that it's supposed to. Nothing terribly analytical is going on. Instead, he creates sedimentary lumps. They aren't so much paintings as crystal formations within which an avatar is projected. A face whose temporal quality is inscribed in it by the medium itself. The edges of each layer show through. Each layer another captured mark and another set of dissimulations. He makes a cave out of wax.

What I find interesting about his work is the tension it suggests between being a cold, calculated act verging on sadism and merely another instance of the cheap romanticism that tends to crop up in Canadian art. I'm not sure which it is. More optimistically, it would be better to say neither. Rather, it dwells in an anxious space between them. The layers upon layers of wax and pigment which he accumulates aren't aesthetic doodling – they're indexes of his failures, of the fact that he's had to go at it again and again with a repetitive stuttering. (Freud infamously reasoned that stuttering was the attempt to shit on the parents using their language as a form of revenge). There are painters who approach their canvas only to realize it is never blank, it has already been filled with cliches. Painting then becomes the task of skinning it down to the bone. But there are others who come to the same situation and decide to feed the space, to let the canvas get so fat that it sags. Scherman makes just such oleaginous paintings and all of the stretchmarks show.

De Sade was known to speak of wax when writing on art. The Marquis was very fond of dioramas and anatomical models cast in it. Wax, the favoured substance of French philosophers in the Seventeenth and Eighteenth centuries, served as the model for matter, able to take on any form it was cast in or any image suspended within it. Wax is the living and the dead because the distinction can't really be made as anything more than one of the relative speed of decomposition. Maybe this is what people mean when they say Scherman's work isn't moral?(a) How can there be morality in a world where there is no serious distinction between life and death, only a very contingent, largely imaginary one? (But isn't that the world we live in?) It's hard to imagine his work is really that unsentimental. In fact, it isn't. The prettiness gives one a niggling sense of doubt that he really goes that far. Not just the prettiness either, but all of the spectres of labour that make up the surface of the pieces and testify to a kind of Kantian abortion at the point of realizing the logical direction of aesthetics. 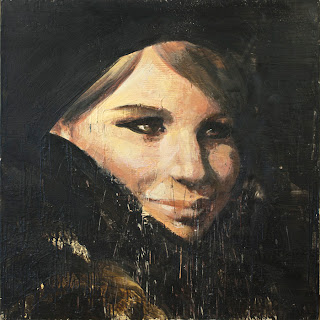 As mentioned above, numerous critics of his work have insisted on regarding it as non-moral, non-intellectual. He's cast as a visionary with no message. However, Jaques Henric exceeds most in creating a completely self-negating text, a piece of utterly hysterical nonsense which winds up imparting everything to the work it attempts to reject. Scherman's work is intrinsically moralistic, but the moral is never made clear. His paintings are jokes with the punchline removed. Yet, Henric accurately observes that Scherman's work has a 'liturgical' base. It's a kind of metaphysical painting for agnostics.

He doesn't paint from history, but from the toilet paper of history (films, photos, books). The scale is that of traditional historical painting, but the subjects are all film still style. The eyes of familiar faces become giant holes that all the little egos that file by can lodge themselves in. They are more like the gaudy photos of a gossip magazine (Napoleon in drag) than they are like a David. This foregrounds their libidinal aspect. Scherman isn't really painting portraits. These are fetish items. The images are fabricated from found sources to exploit the viewer's relationship with history, inviting that reserve of experience to be invested in them, poured into their eyes like a gutter. Those giant faces are painted under the disguise of the grandiose and romantic gestures of history painting, but then the disquieting contradiction that undergirds his work kick in. What becomes clear on inspection is their imprecision, their frayed quality and their limitations. There is nothing epic here, just a murkily illuminated lump of festering matter. You could say that he paints the romance of failure, a particularly Canadian passion. Scherman's work is nothing if not gluttonous in this respect. 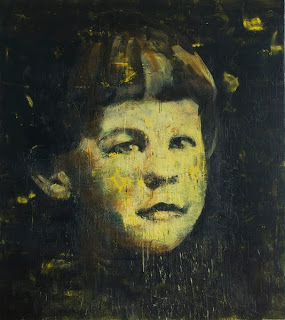 The soft world of wax is always ready to crumble. Dense and honeycombed, his work has the quality of an oozing fat. Nothing is being deconstructed or analyzed, only deformed. On one wall is Trudeau, the lover of Plato, a would-be the philosopher king who brought martial law back to Quebec. He peers across the room at René Lévesque as a child. It could be a saccharine work. In some ways it is reminiscent of a Disney headshot from the 1950s. The brush work for it is a little less brutish. Trudeau also peers over at Machiavelli. Double Trudeau: the man who introduced so much of the soporific discourse that has continued to curse this country in polite obscurantism, a set of noble lies meant to obscure the fact that there is no society here any more (if there ever was). Marx comes off different among the stranded faces. Devoid of the hallucinatory quality of the other faces, he registers as graffiti in their vicinity. This is Trudeau between Machiavelli and Marx, spelling out the remaking of modern Canada and the birth of the cynical and hypocritical glaze it's had ever since. At least you could read it that way... But there's something more sentimental at hand. Scherman is only interested in freezing decay and casting a little light on it – though not too bright of course because then it would melt – that's the scabby nature of encaustic painting. 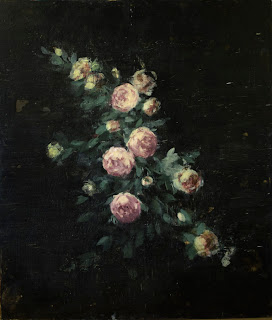 Trudeau's face is enlarged again and again. The painter seems to be looking for a tic. You get a sense of the Prime Minister's arrogance but he blurs into an icon bordering on the kitsch of a Sainte-Anne-de-Beaupré dinner plate. When he is set beside Napoleon, you get a sense of something more sinister. However, in that same room, Trudeau also stares over at Barbra Streisand, who he was dating at the moment. You don't get Trudeau fucking her though, like Scherman did with Eva Braun riding Hitler in "Eva and Adolf." And you don't get Trudeau in drag either. This is where it starts to become clear that what he's doing is different from his earlier work. One of the weaknesses of the series is that it tips too far into the sentimental, something he's often been dangerously close to. His sense of metaphor is unusually weak this time. There's something cowed about it and something a bit pious. The greatest instance of this is the little trio of flower paintings, including "Conversations with the Devil" and "The Death of Pierre Laporte," set under a skylight in a corner like they are part of some PoMo church altar. So why give flowers to Laporte, the mediocre martyr of Canada's last failed revolution? Did his life amount to more than the wax you can scratch out of your ear? Is his rotting corpse just a pathway to a carbuncled ornament? Is Scherman deliberately rendering it as one of the most cliched kinds of memento mori? It really isn't that caustic though. You could also read Scherman's work as a matter of complete indifference to anything but the most superficial. There's a reason you don't see the striking workers of Quebec, but you get the glamour of Streisand complemented by iconic details. He could have painted a banana and called it "The FLQ" or Margaret Trudeau's tampon and call it "Dishrag of Liberty." The work invites imparting gravity to such things, something which it simultaneously mocks in the floating quality of the images themselves. Scherman has always insisted he's not an ironist. He seems to wish he could accord all of this metaphysical value, a morality, but his career would indicate that he constantly fails on this count, and goes back again and again for more.

(a) Lilly Wei and Henric are both guilty of this.