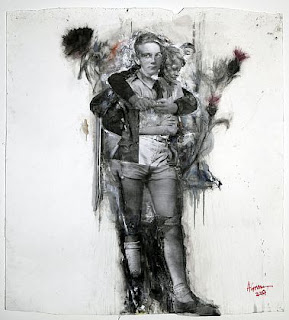 Angela Grossmann has been a presence in the Canadian art scene for decades. Coming out of the "Young Romantic" group of artists in BC during the 80s, she fastened onto a set of formal and thematic concerns that have been largely consistent ever since. Delinquents and marginalized people – whether mental patients, teenaged gangs, criminals or sluts – have been her dominant concern, pinned together by a carefully cultivated sense of tactility and mythology.

The tension in her works resides in the interplay between the discursive function of black and the cancellation of depth. Rather than appearing as distinctive worlds which can be projected into, they are processive; there is a sense in which they function only as heaps, as undigested artifacts. One could say that these heaps invite a sense of secrecy or have some undisclosed treasures, but this would be wrong. There is nothing lacking in the images. There is nothing hidden. They are always in excess. Her canvas is limpid and stressed rather than taut or soft. Its seams show because it is a collage too and plays this out more fully than fragmentary elements on a flat background could do.

Her characters are sexually ambiguous. Generally young, feminine and wearing the accouterments of school children as well as the clichés of Bohemian life. This only accentuated by the canvases she chooses (sails and sacks). Their expressions almost always seem to be caught. They are in moments documented by accident, usually looking away or ambivalent. Such a candidness of face contrasts with the often classical contrapposto position so many of her figures take. The posed bodies are then rendered with greater artifice. Their seams show in a way that is more 'real' than the documentation of their faces. Clothes break open in places, showing nudity which just becomes part of a uniform. The heads stranded like embassies to dead nations are a foreigness upon the bodies then exploited. This is an exploitation of their possible sensualities, all unfolded in a messy, inchoate set of blurs and juxtapositions that create a kind of black comedy when confronted with the tranquil stupidity of the languid or tense faces.

Unlike Surrealist collage, there is no pretense at seamlessness or unity. Her sense of material violence is greater. The failure of the Surrealists had been to place collage too much in the bounds of the clichés of pictorial realism, something they frequently denied they did but which they seemed doomed to do in reaction to DADA. The glue insists on the materiality of the image, on its nature as a heap and reflects a filthy kind of light. This is the element that she brings out most strongly. 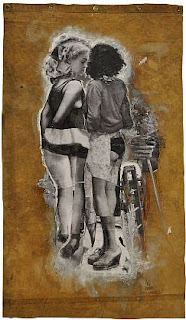 Her work mocks voyeurism. There is no decontaminating distance to make it possible. Rather than a glance, there is a glare, in several senses of the word. First, a glare by her characters, whose faces carry an unknowable subtext. Rather than implying some psychic depth though, they create a certain force of repulsion that forces attention to be dispersed over their bodies where there are plentiful clues about their possible lives though no facts. The glare in their eyes is both biting and a taunt. There is also a glare thanks to her heavy use of glue. It seems more pronounced than in much of her earlier work. Large patches of dried glue are visible in spaces on the figures. These serve to both magnify and blur the fabric beneath them and also offer a delicate surface, one full of small cracks, fissures and slight pollutions of colour.

The bodies aren't rendered as skeletons but as an agglomeration of disparate matters. The strength of the vertical in her work is misleading. While the lines of the figures are clear enough, the nuances of their collaged 'flesh' makes them more complex. These are arranged in stuttered patterns, stitched together to suggest a body. Her figures, or characters if you like, function as inorganic bodies – milieus of filth and trash which are amassed together. Although they have a strong sense of volume, they aren't sculptural, but work by elliptical description. The lines that she adds and the elements which she subtracts give no sense of lack. There's always a certain excess, a way in which details fall away as too many elements. In this way, there is no past in her paintings, no memory, just a kind of recording of the perfect.