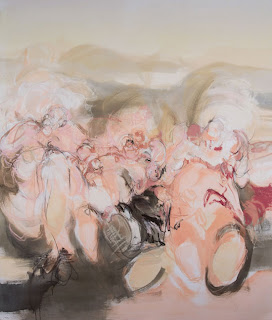 Katie Pretti's latest exhibition, "Vanitas," is composed of ten 88" by 75" inch pieces which, when I viewed them, spanned across the four walls of a side room in an office furniture store. An unlikely place you could suggest, or maybe not. After all, business people die too, perhaps even more than other people do. As Cioran once put it, "Only owners die."

The reminder of the universality of decay is fundamental to the vanitas and the momento mori. An insistence on the fleeting nature of existence was traditionally opposed to the infinite. When ownership was possible, that is, when there was a soul and a duty to safeguard it for God, this opposition could readily hold. But even in our secular age, such superstitions have hardly been eroded. Historically, the entire concept of Right is indebted to this article of Christian dogma, albeit rendered in an even more stupefied form. Our age (I would hesitate to call it a period) is an age of faith, for capitalism is nothing if not a faith of extraordinary proportions. The vanity which thrives within it does so largely out of the dread of death and in the attempt to safeguard against it with ever more paranoid means. 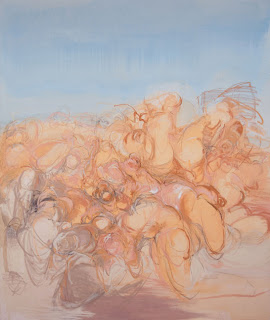 There are all sorts of ways you could think about these new works of hers and their channeling of the vanitas tradition, but we will reserve ourselves to only one or two. We would like to think about how they relate to the tradition of the still life and what stillness connotes from an ontological as well as aesthetic standpoint. The morbid space which the vanitas long ago established, the stillness of the grave which it calls upon and the immanence which this stillness remains in the shadow of, is played out differently here. Since her figures do not properly register as objects, only as fuzzy aggregates of material, they never enable the settling of accounts with the composition of the plane that the momento mori relies on so much for its pathos. There's a kind of symmetry in the traditional compositions of the genre that allows for the viewer to find a centre. They are locked in: a stationary moment of contemplation without the vagueries of the sublime. The immanent and the eternal both equate with death in a moment which operates as a canker sore within duration.

In Pretti, there is a kind of stillness, but it is not the stillness of a void, but one which is suspended within the negative space of the propulsive morbidity which takes over the ground of her images. She replaces meditation with a kind of excoriating emission. There's no sentimentality, only the sensual. Traditionally, the vanitas marked a kind of frontier for these two things, but all of this collapses in her work. The twin elements of the immanent and the eternal are no longer given the same differentiation. Instead, they become interchangeable, placed within the flux of the general where sex and decomposition are indistinguishable. This ties closely into one of the other elements which is important in the work and that is the nature of the gestural abstraction. Immediately within the gesture, there is already a power of indeterminacy. A gestural indeterminacy denotes a mode of activity within a grid where the fluctuations of the material can never be predetermined but instead functions as the marking of an intensity that has passed through it. The marking itself is not purely arbitrary but follows the continuity of this intensity. The gesture does not provide an illustration but a diagram of this movement. However, the gesture itself is indeterminate since it can only be determined by a process of inscription which is external to its corporeality.

Corporeality is manifest in her paintings in the tension between the rendering of the mass of inchoate figures and the horizon. There is a strange horizon, something which is complicated by the absence of a potent horizontal or vertical pull to the image. Instead, there is a play on weight. What could have more gravitas than the vanitas? But what could possess more bathos than the orgy? The distinctions actually no longer matter. Both humour and pathos would require a centre, but what she deploys instead is an almost Stoic streaming of convulsive figures around a crack in a primary form. As the figures multiply without ever registering, accumulating as so many traces of their possible tactility, they produce the visual equivalent of cacophony – it's noisy painting. The horizon functions as a silence, but this is true only if one conceives of silence as the space wherein a sound resonates without relationships. The horizon does not provide a ground for the figurative piles that she accumulates, rather it operates as the echo, the yield of their weight. 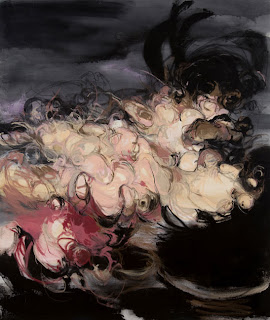 Rather than create a stillness upon which would need to be projected the force of decomposition, she produces a vibrating matter that undermines the soul's pretension for vitality. Ultimately, there can be no contemplation, for death, like everything else, is in a state of constant fluctuation and disintegration. There is no quiet in the grave, no respite, only the oscillations of noise. It is a world without faces but also one without pores. A world with a remarkable impenetrability and yet this is precisely because there is no interiority.

In spite of all of these curls of fat, there's a remarkable flatness to the works. Done in a mix of oilstick, watercolour and pastel, there aren't any shadows, only densities of colour and degrees of opacity. So unlike the common traits of the genre, this lack of shadow (the symbolic extension of death) also involves a lack of trompe l'oiel. There are good reasons for these omissions. Hallucinations require depth and a certain metaphysical terror which is absent in the works. Rather, there is a nearly pornographic form of materiality that would mock such pretensions.