Lalie Douglas: All is not as it seems 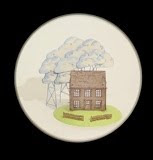 Montreal artist Lalie Douglas' early works often featured deliberately folksy objects, in particular, stereotypical houses. Whether fashioned from ice or toasted bread, these seemed to be the crystallization of her earlier work, which focused on collection and accumulation of homely objects. Her work over the past few years has moved more in the vein of creating self-destructing installations and ephemeral performances. The shift in many respects was basically an inversion. Rather than extending the banal to the lasting by collection, she began creating strange doubles of the banal, almost cartoons of it, and accumulating viewers as the object was destroyed. It is this tendency which is most predominately on display in her most recent work.

When visiting Douglas' new installation at Circa, the visitor is instantly halted in their tracks. You walk straight into the guts of a fake house front. The wooden structure, still baring the pencil marks of its design, is propped up and cages the visitor in, offering them a step ladder and various binoculars to look through in addition to a series of windows. Each set of binoculars offers a different tableau in the distance of a house being ravaged by fire. Through the windows, you see much the same thing, as the 'house' you stand in is reflected back to you by mirrors and you notice it's on fire. All the seams show; the lights are obvious, the colour backgrounds limited by white; all of the tricks of scenography played out in full nudity. They cease being tricks and become props of disillusionment.

There's more to this exhibit than simply an exposition on the nature of fakery though. Douglas seems to be an exponent of the notion that the fake is at its most interesting when all of the seams show, that is, at the moment when it ceases being fake at all, when it drops out of the battle for verisimilitude. It is the melodrama of reality without an other that is actually being played out. The fake isn't fake anymore and it is reality which loses its grounding in the process.

The stakes for this are blatantly played out. The actual object of representation in the work is the transient viewer who finds themselves reflected back in the mirrors facing off with the models. The visitor is isolated and sent back to themselves. They become their own vanishing point in what amounts to something like a Zen joke. If this wasn't enough, the plurality of vanishing points which the work creates decentres the subject, denying it a fixed position or a reliable pose.

Most of the exhibit is a void of white, painted in a way so that all of the edges show there too. Like in many of Douglas' other works, where the exhibit is a momentary thing, one which tends to decompose in situ, the same dynamic is at play in this exhibit – a kind of flunking museum exhibit for a fictional world. This time, however, the guest is the one who is exhibited and decomposed by the situation she has created.

Circa
Lalie Douglas
Posted by Malakoteron at 10:10 AM