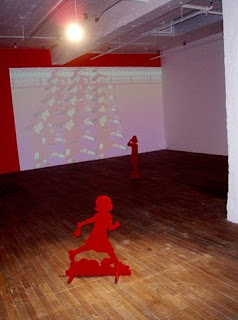 Diyan Achjadi's exhibit at Oboro is an intriguing take on the powers of iconic representation. It's been touring around the country and this time finds itself in an appropriately decked out venue. The exhibit is comprised of prints, video, and installations which spread across the entirety of the red gallery space. From wall to wall one encounters the face of the iconic 'girl' who is multiplied in each medium. She's a flat and simplified medley of many of the cliches of girlhood rendered into an easy to swallow and mass produced form. Cartoons, posters, flags and little sculptures reminiscent of lawn ornaments all cross reference her figure in a series of reds and lush colours. Sometimes it feels like looking at Dora The Explorer filtered through a post-Superflat version of Maoist propaganda.

My ongoing body of work, Girl, centers around a single, awkward, cartoon-character, a forever-flat golden-skinned young girl of unspecified ethnic or national origin, dressed in a simple red or pink dress with knee-high socks and mary-janes. She is the only character in her world. Sometimes she is alone and isolated, towering over a landscape punctuated by puffy explosions in bubble-gum pinks; other times she is multiplied into a perfectly uniform army, marching and exercising in formation. She exists in an imaginary space, pink- and red-hued, where she may be both the heroine and the victim of a series of vague actions in changing urban landscapes. Each picture functions as a still from an unmade animation, deliberately illustrative but frozen out of context.   -Achjadi

Girl roves through bright landscapes littered with destruction. A child soldier who regards the explosions and disasters around her as little more than props in a game. There isn't really a narrative in the work, just an impressive circulation of energy. It starts out seemingly innocuous, like a little bit of children's TV and, through its repetition and its re-articulation, gradually becomes obvious as a technique of aggression. Perhaps most interesting is the way the work challenges the idea of brutality and militarism as they're commonly accepted. The soft colours and simple features make the work easily palatable and inoffensive. Her child soldiers are deadly and aggressively cute. They are less violent than they are happy and indifferent to the world around them. It's the brutality of babes.

The work seems to raise more questions that it answers, but that may depend largely on what you think it should be saying. There's little present in the work to actually counter the interpretation that this is a clean cut presentation of utopia. Although the artist coaches many of her statements on the work in the vein of social criticism, none of that is actually present in the images she creates. They're attractive and decorative and this is self-consciously reflected in the work, with the girl waving flags of herself, perfectly enclosed in her own narcissistic paradise. As Momus once said in respect to certain trends in Japanese youth culture, it's a celebration of 'cute fascism'.