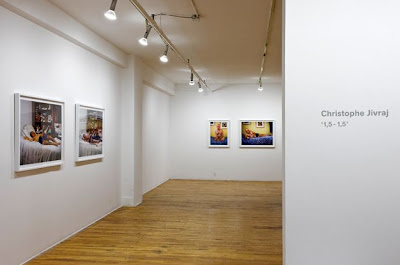 The body is disabled in the image, but this is not because it is an image of a disabled body. As far as photography is concerned, the idea of a disabled body in the medical sense doesn't really mean anything. You can't photograph a medically disabled body any more than an able one because they do not exist on that plane. Such a naive representation would be an absurdity. This issue is played out in a different way by destabilizing two of the most generic genres in photography. On the one hand, there is the social realist portrait. The compassionate voyeur, a la Walker Evans, (or as the notes indicate, Jivraj pays tribute to Shelby Lee Adams) who stalks their way into the private lives of people to capture their souls. On the other hand, there is the pin up or centerfold. The anonymous voyeur who gazes for a glimmer of the soul to catch a cheap thrill. These two things collide in the photos and both are disabled in the process. The photos do not manage to fetishize either the soul or the body. This is not to say that the work is not sincere or that it is in any sense mocking. Far from it. But, whether intentional or not, the implosion of these two tendencies when they come in contact like this manages to significantly alter the figure.

The photos overtly use all of the pretenses of these genres, most notably in their performative lack of pretense which is rendered all the more self-conscious by the way in which the models are posed. Placed in the most standard of erotic poses, they stare into the camera and disfigure the pose by failing to achieve the appropriate stereotype. Additionally, the figure is rendered in a kind of void which, though it uses the details precious to porn and to documentary, does so in a way which is essentially negative. The foreground of the images is always blurred, suggesting a kind of lurch into intimacy which is immediately displaced by the strong focus of the rest of the image. The body is centred in negative space and its centrality renders the banal details of life into something with even less life than a cheaply painted backdrop. The divorce between their figure and the world they inhabit renders the surface of the image excited, and this excitation is only increased by the fact that it jars so much with the banality of that world. The discovery of such a point seemed to be a guiding factor in how the series of works were named.

The numbers (in the title) correspond to a non-verbal form of communication that several of the models use. As they have a limited vocabulary they have no words for beauty, sex, sexuality, nude, nudity, etc. The only word that the models liked for the title was ‘body’ which corresponds as ’1,5-1,5’.- Pablo Rodriguez

The gesture of these figure, their desire manifested as something which escapes the established code of the generic sexual figure, is what gives the work its strength. It's also why there is so little too distract from this moment. However, such a moment is not allowed to be crystallized. Instead, it continues to function by resonating across the series of images. The figure does not speak its desire. It's debatable whether it even communicates it so much as makes it palpable.

Skol
Posted by Malakoteron at 8:17 AM