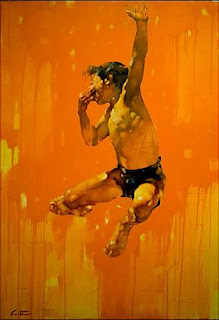 Nestled amid the boutiques of lower Westmount, Galerie d'Este was displaying paintings by the Russian born and Toronto based painter Costa Dvorezky. The paintings, created over the past two years, have thematic consistency, offering up a series of bodies suspended in mid air. The figures, largely divers or gymnasts, are stranded in poses which stretch their bodies out in ways that render their stances ambiguous. Their extremities lurch out of frame, but these aren't images of movement. Movement requires a stability of space and time with the surface of his canvas makes difficult if not implausible. These could just as readily be stationary bodies torn up by space than the other way around.

The bodies seem to have been isolated from photos or video and stretched across the canvas. They don't strike easy poses. Instead, they take on a form which distorts the limbs, creating small crevices of indeterminate matter. This is intensified by the density of the paint which often gives way to show the grain of the canvas beneath. The way skin is manufactured is remarkably violent. Each variation in shade is slathered on with distinction, the edges of each variation appearing like a scab on closer inspection. This sort of corporeality is echoed in the way that the painter cuts the canvas, making digs into the paint to muck up the lines of the grid. The accent added by a multiple of diagonals also makes the figure more distorted while it striates a classical geometric set-up. It does this by disturbing the solidity of the figure with open cuts that deny the body its illusion of solidity, making it more phantom like and placing the bulk of material in the element of grounding.

Perhaps the most striking aspect of his paintings is the way in which the figures are grounded. The layering of the paint does not allow for a foreground and a background to be established. In their place is a force of suspension which mirrors that of the bodies. This could have led to superimposition and blurring but instead results in a field where the ground is continually shifting in juxtaposition and denies determination. There is no distance. Even shadows are rendered only as the decomposition of body elements. The surface never comes across as flat. Rather than distance, there is the density of the paint which operates as a skin, every element of which enters into a kind of absurd echo with other elements of the canvas creating a sense of what logicians sometimes like to call infinite regression.

These procedures externalize the grid, constantly pushing the viewer out and refusing to establish a clearly delineated plane. The painting can not be consumed; rather, it forces itself on the viewer. As such, the viewer can not operate as the integral function of the image but merely as a rejected interloper, increasing the voyeurism which much of Dvorezky's earlier work, notably his sado-masochistically themed works, hinted at. This is a voyeurism which is perpetually unsuccessful; the image always exceeds the comprehension and makes a game of this strategy of frustration.