Marcel Dzama – Of Many Turns at MACM 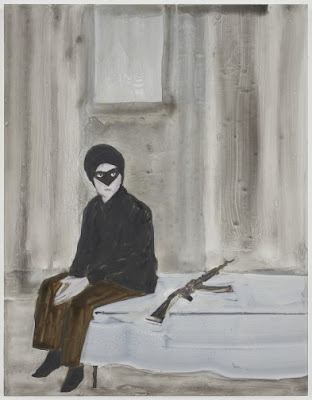 Winnipeger Marcel Dzama has emerged as one of Canada's major artists in recent years. In spite of his fashionability in New York hipster circles, there's something almost embarrassingly Canadian (ie. repressed, geeky, passively spiteful) about his work. Much of the exhibit was culled from shows he did at David Zwirner in New York in recent years. It is spread out over three large rooms. One was dark, delicately lit dioramas and the other two were typically white rooms whose exhibits were largely comprised of drawings, paintings and a few sculptures and combines.

His obsessions and their continual permutations were cleanly spread out, though their organization was somewhat elliptical. Although the introductory room of dioramas firmly anchored the work in the history of art from the first moment, the rest of the exhibition drifted rather aimlessly. This may have been deliberate. For while Dzama clearly plays on the history of art, one of the other major things at play seems to be the dismantling of history through art. 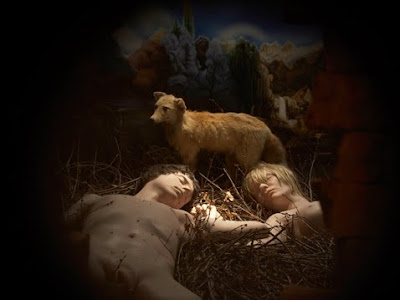 Appropriately, the first thing one encountered when entering the exhibit was his homage to another Marcel, Duchamp's infamous Étant Donnés. Whereas Duchamp effectively did away with narrative, providing an instant which was impenetrable but taunted the viewer with the idea of penetration (a splayed vagina), Dzama expands it to create a narrative event, but one which is nonsensical and mocking. Although it suggests logic (the phallus) it degrades the idea with fairy tale motifs and, while retaining an intense eroticism akin to Duchamp's in some respects, it extends the ironic distance. They are both childish images, that is, images from the impenetrable mind of the child, the mind that sees only images and glides upon the surface. While Duchamp's achieved a secretive innocence and retained it, Dzama's couldn't be further from it. He hides things in a different way, one which is also playful, but without the violence which the earlier Marcel's work entails. Dzama's work is a fantasy about innocence.

Innocence can never be known better than when it is in the context of violence. The issue of victims doesn't come up in this. There is nothing less innocent than the idea of a victim. For this reason, the violence which circulates through Dzama's work never labors long under meaning. It seems to taunt the viewer to look for meaning but shirks any accumulation of it. It's a luxurious violence, one from which you cannot salvage a lesson or a readily stored value. The paintings pay delicate tribute to the children's books of the late nineteenth and early twentieth centuries and the early illustrations of the Indian campaigns. The violence which saturates his work is that of a mock history, as many of the titles found in his works serves to indicate. Atrocities of colonialism are flirted with everywhere, particularly in his drawings, whether this is played out between human figures or between humans and animal hybrids.

This may be what is most striking about the work – its thoroughly amoral and ahistorical recycling of history. In this, he is akin to, and suggestively indebted to, the work of Outsider artist Henry Darger. Darger's complicated drawings made through tracings and collages of exactly the kind of works which Dzama borrows from, also weave their way through the goriest aspects of history and attempt to come to them with the eyes of a child. But unlike the profoundly, if rather esoterically, Catholic Darger, Dzama's works don't betray much religious feeling. Nonetheless, his dioramas in particular, continually play on the motifs of devotional art while apparently skewering any kind of spiritual ideal. Instead, they play up the artifice and the materiality of their form.

The material quality of Dzama's work is remarkable because it brings something about art practice to the front. When artists appropriated Outsider art and handicrafts at the turn of the last century, it was cloying, and largely experienced as cloying by the public and critics. Now, it has become almost cute and this cuteness makes the violence in the work more palatable. Much like the muted colours and the lack of gore, once again indicating the very surface focused kind of violence he concentrates on, it's a carefully orchestrated form of aggression, almost a passive-aggressive one. Indeed, the futility of this aggression to do anything within the context it exists in is displayed everywhere. This is especially the case in his other homages to Duchamp, his mini-museums, the Boîte-en-valise, that he dedicates to his master. Only, it is now no longer an aggression against museum culture and art history, but a way of winkingly acceding to it; a terrorist rendered as fake folk art for the bewildered.

Dzama at the MACM.
Dzama at David Zwirner.
Posted by Malakoteron at 8:23 PM