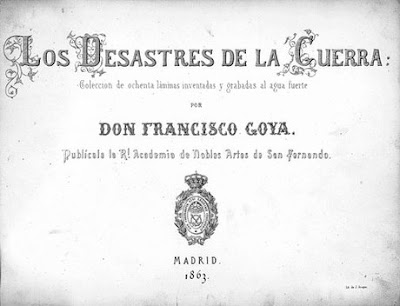 O Goya. You've haunted me most of my life in one way or another. I recall, as a little mite, reading all about your legendary appetite for prostitutes and your frequent bouts of venereal disease. The latter seemed to live in your body almost metonymically with the social and political changes of your time. It was wonderfully romantic to think of you straddling feudalism and the Enlightenment, your eyes growing dimmer as the progress heralded by Napoleon spread across the land. There are endless tomes on his work. Of those I've read, the one I'm actually fond of is "The Double Life of Francisco de Goya" a horribly trashy little book full of gossip that lit up the dull days of my early adolescence. Although it's rather dubious, I still prefer it to Robert Hughes' celebrated but rather pompous take on things. The key to this is simple. His work is profound, so you don't need to say much in that direction. It's work that pisses on speech, particularly grand speech. In fact, the relationship between his pictures and words is fundamentally excruciating. His use of titles and texts is entirely ambiguous and often seems morbid and ironic, often running entirely counter to the highly humane readings his work is given. However outraged his work might be, it's tinged entirely with misanthropy and pessimism.

Placing him in a gallery is always tricky. Whenever I've encountered his paintings, they've seemed out of place. Things are slightly less awkward for Callot, an often underappreciated master whose work is far more amenable to display. In fact, his work is much more disquieting to encounter in person since the images are so small, so highly detailed and surrounded by archaic French that is nearly indecipherable.

There's an undeniable fetish aspect to such an exhibition. These images are very easy to find, but to want to see them this intimately requires a perverse quirk. The problem is that when you take works which are essentially carnivalesque and stick them somewhere that feels rather like a morgue, you lose the brutality and you end up at a funeral where the corpse is wearing too much makeup. The gallery was, as usual, blatantly sterile with its subtle off white walls in the middle of a renovated industrial building. The prints were carefully framed in an equally sterile manner with light wooden frames the only thing to make them stand out. The prints are all remarkably small and the display accented this, making them seem even more miniature. If such tiny atrocities were not to one's liking, you could look at slides of them projected on the wall, blown up. Just off centre of the space was a copy of the Goya works, isolated under glass like a coveted luxury item.

Both sets deal with heaps of bodies strewn over space. There's terror in Callot, but there is horror in Goya. They are two very distinct things and their presence has a great deal to do with the aesthetics sensibilities they come from. Callot's work is emblematic of the baroque, offering panoramic views and perfect symmetries, a delicate play of black and white and balances within the composition which are totally apparent and still serve to accent the brutality of what they depict. The cleanliness of his lines also adds to this. Death in Callot is white and violence is rendered through the lines of the figures. In Goya, something very different happens. The thing about him is that consistently, and particularly late in life, his work is remarkably heavy, but not solid. This works in two completely different ways. On the one hand, his lines multiply: They are sharp and cutting, not so much figures but wounds. One the other hand, the grit of the image intensifies, creating a dense atmosphere which serves as the violence in the image while the figure is a kind of detritus.

Of course, you can't really go to see Goya anymore, not unless you're ignorant. The Chapman brothers have been rather infamously appropriating the man for years, engaging in an art historic debate about the way violence is represented and sold by the art industry with pre-packaged meanings that are aesthetically dubious. Since few of the people who bother going to this kind of thing have the luxury of going in innocent, they're stuck in a rather humiliating conundrum about aesthetic pleasure and ethical intentionality in works which are celebrated instances of captured violence.