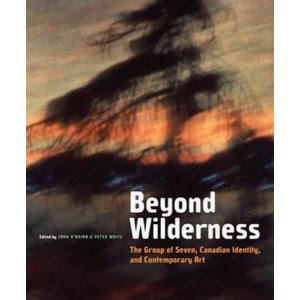 Notes on Canadian art: From the depersonalized territory to the kindergarten of Oedipus.

The Group of Seven are a litmus test for the idea of a specifically Canadian art. They have become one of the most generic and harmless markers of "Canada." They have become postcards for a mythical land and held up as the articulation of what it means to be Canadian. Since the beginning, not everyone liked them of course. John Lyman was one of their more vociferous critics, objecting to their portrayal of the country as an unpopulated region on the Precambrian shield rather than as a burbling cosmopolitan metropolis, like say the Montreal he called home, with its endless importation of cultural fads. It wasn't until the rise of a significant Canadian art market, with international economic interests, became tangible that a break from the highly esoteric nature of the established landscape tradition became viable. This, as the book admits, was coincident with the collapse of the kind of Canadian nationalism associated with Diefenbaker, famously mourned by George Grant, and the rise of a far less sovereign, perhaps more cynical, neo-liberal Canada exemplified by Trudeau and Mulroney.


Beyond Wilderness: The Group of Seven, Canadian Identity and Contemporary Art casts itself as a kind of corrective measure. To replace the 'delusive' character of a singular Canadianism as identification with the land and the myth of the 'Great White North', it sets up a mosaic approach. In fact, the argument of the text is precisely its formalism, its insistence on an apparent multiplicity. This is also its failing, for in making this claim as an objective correction, it negates its own aim at criticality. The mosaic is rigged to negate one view and celebrate another, even in its very form. McLuhan always managed to exploit the mosaic approach without stumbling into total superficiality, but that isn't the case here. Therefore, the criticism ends up half-assed. The authors of the book clearly know this. In the introduction they spell it out. They sought to map out the replacement of a culture of 'northern destiny' with the enshrinement, from the Trudeau era on, of 'no official culture'. It is within this ideology that the book functions and which it fails to seriously interrogate. Although this is a problem in itself, the greater failing is that it never really explicates its most basic thesis: "While the idea of wilderness demonstrates remarkable resilience in Canada's national life, it is no longer the authoritative source of power the Group and their associates once claimed it to be." (BW 6) Although the book goes to some pains to, at times sardonically, lampoon the Group for their naivety and the political interests which their works served, it never pays the same favor to the political and economic machinations of the 'pluralism' it promulgates in their place but takes them as an ineluctable fact bordering on the 'natural'. The ontological shift which the book notes between the first and second half of the twentieth century is never seriously analyzed, merely accepted. What the book lacks is any articulation of how this has come about, namely how consumerism and the subjectivation that it entails (and the subjects groups which are its artifacts), came to dominate over the earlier form of territorialization.


There are other things the book lacks. It never fully articulates the relationship between the Group and the traditions it sprang from or against and their unique form of Modernism which was pitted against International or American Modernism. It brushes aside the kind of radical alternative modernist gesture that Wyndham Lewis saw in their work. Even if the 'controversy' around the Group in Toronto was largely invented as a marketing scheme, something which even Dennis Reid will admit is the case, their modernism was different and one which they likely didn't understand. Not that the book goes anywhere near investigating that, or the positive example of a kind of national art that Barry Lord expounded in his generally neglected book, The History of Painting in Canada: Towards a People's Art.

Here is a world in which all things are potential... the world ... as it will be... regarded in the light of eternity. Here the soul of a man may become one with the Everlasting, beyond sentiment, beyond good and evil, beyond victory and defeat, beyond death itself.


Nothing in the book comes close to dealing with the kind of haunted aristocratic radicality (complete with its own eschatology and racism) which the imaginary nation the Group conjured – if not actually embodied – possessed. Aristos become pharmakos, but the stupidity they left behind is still there, only more enshrined and more diffused, falling under new avatars. This exchange of one false consciousness for another is what really happens across the map the book draws. These are very different forms of delirium though. The first a striving for escape from technocratic liberalism, the second an attempt to escape from this strange fantasy of a depopulated world and into one of struggling for entrenched subjectivities within a kind of cosmopolitan totalitarianism. From art as contempt for the effects of civilization to art as a classroom show and tell.


As the book progresses, it moves from the kind of lyrical, slightly crazy writing of the early half of the twentieth century to a language which sounds increasingly bureaucratic and technocratic. This shift is best articulated by two artists represented in the book: Lawren Harris and NETCO. The mania of Harris, travelling from a ghastly world of the impoverished to an unpopulated wilderness before stumbling into a Nordic vacuity is immense and horrifying. Ian Baxter&, from his work with NETCO and on, also maps out this territorialization of the Canadian landscape. If the Group celebrated a 'wild world', the Baxters celebrated its total bureaucratization. Far more graphically than the Group did, they spell out the happy corporatization of the country using everything as art in a colonizing gesture that makes Paul Kane's attempt to capture the 'dying' aboriginal culture seem quaint. Indeed, it is the preservation of the vanishing, the sentimentalization of the country that is given the most uncritical attention by the volume. In fact, there's scarcely anything that could pass for reflection on it. "La Region Centrale," Micheal Snow's panoptic masterpiece of cinema as subject and as the nexus of a perpetual expansion, is a kind of imperialism of the eye which is now empowered by a massive and complex technological apparatus. That is, it mirrors the implosion of Canadian sovereignty into a kind of schizoid space in the process of capture.

Although the book acknowledges there was some kind of landscape painting in Quebec, it never goes into it in any detail to examine this rival tradition and its own myths (let alone those of Eastern Canada). Nor does it seriously acknowledge the significance of the rise of abstraction in both English and French Canada as a reaction to landscape and the notion of nationalism(s), something which was explicitly the case in people as divergent as Paul-Émile Borduas and Harold Town. The pushing aside of landscape and the rise of abstraction are inseparable from the radical shifts in Canadian economic policy and the massive influx of American academics and business people into the country (and into most of the institutions which employ the various authors of the text, many of whom have a vested interest in these rival art streams.)


There are highlights to the book, of course. Scott Watson's hilarious vitriol over the group is almost worthy of a Lewisian polemic and the truncation of so much information, while necessarily superficial, is also fascinating, if often by coincidence. One of the most intriguing parts of the book comes from its ambivalent relationship to Emily Carr who, perhaps even more than the Group, has been utilized to represent the Canadian wilderness. Her fantasy was different from the others, and more historically grounded in some respects. It isn't that Carr was less misanthropic – regardless of her sentimentalization of the land, its people and their ruins, it is still depopulation and emptiness which she seeks. But Carr didn't paint the wilderness. Borrowing as much from the Futurists as the aboriginals she encountered, she, perhaps quite unconsciously, turned both of them against themselves. She painted the decay of cities and their involution. She was, following Piranesi, one of the great romantic depictors of the collapse of an aristocratic society. A painter of refuse who found her rapture in depicting the death drive. It is against this kind of extremity that post-60s art in Canada turned as it was progressively institutionalized and marketed. The force of Carr's work has been completely buried in this process.

I have no serious objections to the critique of the Group the work offers, although it tends to be a bit pious and unimaginative. The larger problem is that it is a critique of one myth done in the service of another, perhaps far worse one. One's a utopia, the other just a simulation. What it demonstrates is the mode of Canadian identification as tourism, best exemplified in the postcard like project, "A Group Of Sixty-Seven" by Jin-Me Yoon. The utopia of the Group has been replaced by the commodification of ethnicity, or as the Mulroney government nakedly used to put, "Multiculturalism means business." In this, as usual, critique ultimately services the state. In effect, what the book does, indeed what it is formatted to do, is to fit quite pristinely within the state discourse which has replaced the far more ambiguous one which the Group fit within. It also clearly maps what happens to common artistic ideologies when the financial sector of the country expanded outside of Toronto. While one can critique the Group for essentially mythologizing cottage country, that was at least a few steps up from where the critique of them winds up, which is not much more than a disparate set of sentimental tourist postcards. If, as Peter Lamborn Wilson once put it, "multiculturalism is simply the recto of that page whose verso is 'ethnic cleansing'," the appearance of such critical 'gestures' in fact marks little more than a kind of pious masochism.


What ought to be of concern, it seems to me at any rate, is the power in territorialization of a uniquely sedentary variety, the concern of which is the warding off or negation of said effects. That is, the rejection of subjectification. For even underlying the manic subjective procedures of multiculturalism is the fundamental realization that what strives to be recognized in the process, that is, what elects itself as the Good or righteous, is intrinsically ephemeral, superficial, a means of escaping the Thinking of the territory itself by domesticating it.

Beyond Wilderness: The Group of Seven, Canadian Identity, and Contemporary Art. Edited by John O'Brian and Peter White is available from McGill.
Posted by Malakoteron at 3:11 PM