Brendan Flanagan at The Angell Gallery 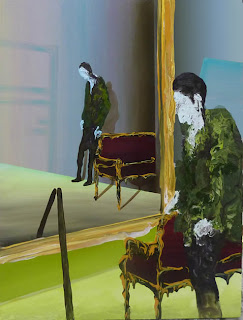 Molten Meat Puppets.
Brendan Flanagan's new paintings concentrate on moments which are peripheral. The action always seems to be taking place off to the side. His figures stand like the stage hands of a Greek tragedy, forced to watch the heroic actor walk off the stage to have his eyes gouged out or his entrails eviscerated. Bored, inured, perhaps even shocked: it's impossible to say with the lumpen impersonators that feature in his works. Standing or straddling, they are stuck in a motion whose resolution might never salvage it from the absurdity they are currently stranded in. As such, they document the ambiance of an event rendered into material form. They are not tracings of the sensation of these mysterious and unknowable events, nor are they their echoing.

With the body delineated as so many lumps, pores and crevices, the architecture that surrounds them takes on a more colossal stature. Sometimes, like the figures, it seems on the verge of collapsing and pooling into an indifferent mass, but much of the time, the architecture rises to a sinister height that only intensifies the crude and grueling gravity that affects them. 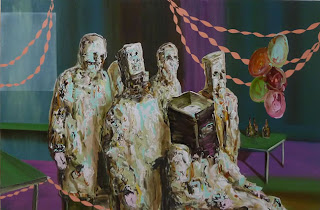 The faces of his figures are fashioned as lumps, more akin to elements of landscape than the perforations that supposedly hold the soul. They often function as masks, but masks which only point to their nature as meat. He plays jokes with this quality. In "Costume Party," the only way to tell that there are actually costumes on most of these pallid meat creatures is because some of their heads are squares. For the figures, nothing is hidden; all is on display. He doesn't paint human beings. Instead, inevitably, we're in the space of meat. He paints meat in human form. In fact, beings seems to be precisely what is pushed to the edge in his works. They aren't beings but figures, pure and painterly but rippling with sensation. There is nothing abstract enough about them for them to seem like characters. They are too concrete to have souls. While there is no mystery in the figures, only a force which cannot be broken down into communication, there is a secrecy around them. "Row" and "Mass" feature crowds of suited figures who lurch into apish forms, their excitation forcing an involution of types. Each figure finds echoes throughout the group. Each action is retarded; merely the flailing of an appendage on a body to which they all belong, these subtly distinguishable idiots who could at any moment revolt and fall into a welter of soft colours. Indeed, the colours which make up his interiors aren't merely softer compliments to those of the figures. Defiantly unmeaty, they are resolutely flat. Not even scraped down, they are often airbrushed, giving them a haunting ethereal sheen. This flatness is an extension of the violence of the frame. His figures, trapped in the frame and gorping out, suffer the additional violence of the grid that underpins them. One couple collapses on it. Others stand transfixed under it as it begins to drip on them. But it is when the paint flattens and hardens into an opaque aquatic colour that it illustrates the most violent aspect of his imagery. It is not a convulsive or melodramatic violence, but one which is still, cool and calm: a collection of gently vibrating tones that hushes the shrillness of the figures. This is the violence of the soul: the violence of architecture: The Absolute. A God who has no body, no meat, and therefore despises it and tortures it. 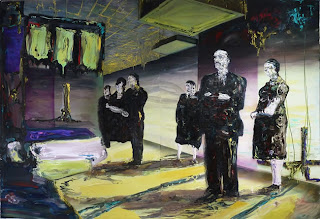 This kind of intensity is new to his work. The play between the convulsive and the cool isn't a matter of contrast but of negation. In his earlier paintings, the power of this negativity was absent, but now it functions like an incredibly idiosyncratic variety of chiaroscuro, one which can only make sense according to the world of painterly densities that Flanagan creates. One could say that his earlier paintings were too melodramatic, too expressionistic. These new works succeed in being more unsettling because of this. There's something more disturbing about them and, at the same time, more humorous. It's a humour which is part sardonic and part sad, somewhere between a laugh and a cough.