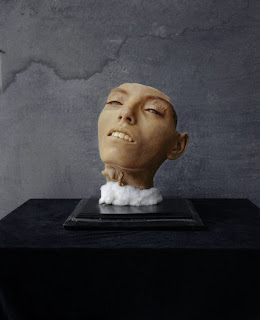 Morbid Fascination.
Although I've always had a morbid sensibility, something which comes in no small part from growing up as the scion of a family of undertakers, photographic documentations of death have always struck me as well... odd. There's a discomfort involved for most people in such images. Decay of the flesh and the vacuity of the eye sockets often makes people cringe. It's a strange game of empathy, or narcissism as least, though the two things are essentially interchangeable. However, for me, being familiar with corpses all of my life, wandering into Jack Burman's show at Clint Roenisch's gallery was almost like going home. That eeriness, combined with the gallery's charming colonial cottage décor, and the utter indifference to my presence demonstrated by the people running it, created a meditative atmosphere.

Ever since its earliest days, death has always been an obsession of photography. The massively popular trend for post-mortem photography (and ghost photos) enjoyed by the Victorians has been having something of a comeback lately. But the basic functioning of the medium itself - its reliance on the scar tissue of light and chemistry and the freezing of moments - as well as its role as the bland mortuary attendant of history has marked its essentially morbid character just as much. Since photography is, as Sontag among others have observed, ineluctably a matter of death, it seems redundant to actually take photos of things which are quite literally dead. And that's ultimately what strikes me as the problematic issue when photographing the dead. It is less a question of morbidity than of sentimentality. Much as is the case with most pornography, there is something almost pious leaking through this rather different form of carnality.

Burman doesn't strictly photograph the dead, of course, something which those writing about him often seem to miss. Instead, he photographs a highly mediated kind of dead, the dead in suspension – the dead of museums and the mummified dead. The long dead: crystallized and often reified by chemistry into documentations of life. By virtue of this play on the basic redundancy involved – the dead held within the medium of death - there is actually very little about the dead or death in his work. Instead, it's an institutionalized embodiment of death. The sense of contact or contamination is almost non-existent. It's much more like going to visit a taxidemerist's studio – death reduced to a goo gaw for the living room. His often monumental photos are less about death because of their monumentality, which makes them melodramatic. In fact, they are essentially the documentation about how different social institutions paranoiacally attempt to extract something from death and make the process of decay stillborn ('decay' demarcates the threshold of the world's greatest orgies, as any maggot or worm testifies).

They are lovely photos, of course. Clean, clear, with precise details and set out in a classical way with highly conservative framing and a careful colour scheme. They are, in other words, photos which are essentially informed by a museum or curatorial aesthetic, one which strips the rawness of decay away to present what amounts to a kind of airbrushed biology – a post-mortem glamour photography. This is also their strength, because it points to the specific kind of anxiety which underlies the fascination with such images. It's an approach to death several steps removed and constantly mediated by technology and ideology. It's an approach to death which is so fundamentally anti-septic that it never actually approaches the dead, only the shadows of the thing that carry what death leaves behind. In this respect, it comes close to documenting the most puritanical kind of living, a kind of totalitarian life which is sealed in and segregated from the real threat of materiality. 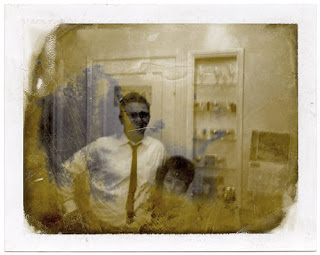 Curiously enough, you can wander just a few doors down the street to the Stephen Bulger Gallery and see an exhibition which deals far more profoundly with death, although it seems like this is rather foreign to its intentions. William Eakin has made a career out of rescuing discarded photos from the bins of charity shops and plays the charity forward, blowing them up and mummifying them once again. If photographs steal the soul, what he does is essentially soul murder.

His carefully selected polaroids from the fifties and sixties are intended to offer the same 'optimism' which he saw springing from the early period of the Polaroid generation. However, the naïve optimism of that time has been replaced with something else. It would be hard to think of Eakin's work as naïve, although it is a position he assumes for rhetorical reasons. His work is carefully framed, both literally and figuratively, within several frames. Unlike the polaroid's easy immediacy, his work operates at several removes from the instant moment. Scanned, blown up and distorted, it gains enormous texture as it is placed upon layer after layer of display material and then suspended on the wall. Together with the other images, they stand as a kind of sedimentary layer that's been unearthed. These fossils of optimism are transformed by their museumification. Removed from their sentimental context as discarded skin from the flux of the everyday, they are placed in an entirely foreign context, one which becomes entirely historical and social rather than esoteric. That is where their reborn optimism lies – in the faith in the continuity of the everyday in spite of time's erasure.

What gives the works their force, however, is their marks of decay – the layers added by time as it strips the subject's of the photos of their lives. The scratches, stains and splatters that have collected on the surface of the images, effacing their original content, replace it with the progress of their death. They become a kind of biograph of morbidity.