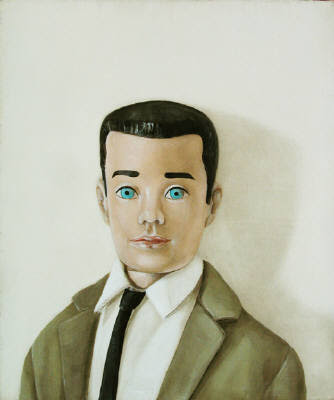 The Absurd Angst of an Action Figure.
Holly Farrell is currently showing some carefully balanced paintings at Katharine Mulherin Contemporary Art Projects. The show is made of a series of paintings of Ken and Barbie, sometimes together, but mostly alone. It's a fascinating show. One which is about fascination and which manages to raise all sorts of disturbing implications about the nature of viewership and empathy, as well as concerns about what constitutes a still life and how it differs from a portrait.

Immediately, one wonders if you can you even paint a portrait of a doll? If a portrait is meant to convey some hint or peek into a subject's inner world through their stance and gaze, what does a mass produced object relate? Of course, it's not as though Ken can feel anything, or has a psyche of any kind, or does he? The thing is, it doesn't actually matter if this is a painting of a doll or not. It's far too easy to dismiss it that way and one looses the really unnerving thing which pulses underneath these portraits which is the interrogation of what constitutes a face.

Painting dolls isn't new, photographing them even less so. There's been a lengthy history on these counts. In general, such procedures are split between spats of nostalgia and a conflation of fetishism combined with a critical analysis of the nature of representation and identification. While a doll may be an innocent object, the forces which go into their creation usually aren't. They certainly aren't when it comes to Barbie and her coterie of associates.

Even if these are portraits of pop culture icons, there is nothing about them to ally them to pop art. In fact, they invert the basic scheme of pop, which was to turn real people into iconic commodities which could be reduplicated to give the illusion of fatal charisma. There's a very different kind of fatalism at work here though, one which is predicated on a detached singularity rendered palpable by the fact that the paintings render their subject on a colossal scale.

The paintings don't work as criticisms of icons of femininity or in any of the usual ways in which the Barbie image is frequently appropriated. While the Barbie paintings are pretty, I use that word carefully, the thing that really stands out in the exhibit are the works featuring her erstwhile companion, Ken. What's most impressive about the paintings is the degree of anxiety which seems to be infused in his image. Barbie actually comes off as almost non-descript. Her droopy eyes and flowered background provide her with a relaxed context. She seems distant and disinterested. They are pictures of elegant boredom. But Ken is a different case altogether. His glance is forced and full of a terrified innocence. His eyes hover over his face as if they were an alien power. He nearly always appears suspended in a void.

One of the most primary distinctions between the two figures is the way in which their necks are depicted. Hers is soft with delicate touches of white as the head and neck meet in slight shadow. By contrast, the space where his head attaches to the neck is articulated with a harsh line. His head is clearly detachable, a foreign object on his body. Ken has a unique part symbolically in the history of male icons. In fact, he is probably the most exemplary of masculine icons to be created by and for the female gaze. He is a complete fetish item, every bit as much as one of Bellmer's dolls. His joints can be taken apart and his head exchanged. His infamously ungendered body is smooth and thin to the point of fragility. Even his ill-fitting clothes seem to be applied to him by some external whim, forcing him into an idealized frame within which he could readily collapse.

It may seem absurd to say that a portrait of a Ken doll can possess pathos, but it does. There's no hint that Farrell is attempting to disentangle these prejudices of viewing from the process. Rather, it seems to be embraced whole-heartedly. They aren't still lives for a still life documents objects which have been placed into the world and into a context separate from their making. There's something existential about still lives. But that's not what's at stake here. These 'objects' never enter into another world. There is nothing else. They tell you nothing; instead, they enact the creation of a face and the affective possibilities which that entails. Even if the projection of emotion onto a portrait of a doll is absurd, it is not absurd because a doll feels no emotions. Rather, it points to the absurdity of empathic coding – a concrete system which dictates emotional investment through an abstract geometry.

His face is always rendered at dead centre in perfect symmetry. The space surrounding him isn't so much negative as void. Unlike his female companion, he exists in a blankness. This lack of context is only intensified by the constant change of clothes, and careers, that the series of portraits places him in. While she is a figure of ideal beauty and, therefore, an absolute, he is a figure of almost superhuman blandness, readily decapitated and transported. The context in which Ken's face are placed does not function as negative space, but as the extensive power of the face which has the function of an apparition or epiphany. A kick.

A face is a complex thing. One's humanity is subsumed within this grid of holes and lines, but the face is more profound that humanity. Resting always within every face is the inherent inhumanity of this structure, even while human codes attempt to interpret and control it. As Gilles Deleuze once put it, the face is always a horror show; it is always something anterior to, and in excess of, the life of the subject.

Holly Farrell
Posted by Malakoteron at 6:26 AM