That Hideous Strength by Lauchie Reid at Narwhal. 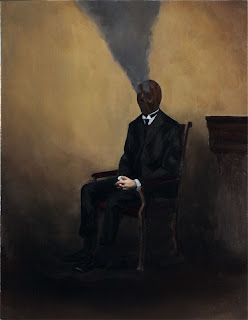 The first solo exhibit by Lauchie Reid of Team Macho provides a charming and sinister splash amid the many galleries of Queen West.

Reid's small oil paintings are done in a mix of turn of the Twentieth Century styles. This serves several purposes. It reinvigorates, without pastiche or irony, a style which has become marginalized by art history and plays at reclaiming them for the marginalized. But these are images of the exclusive as much as they are of the excluded. In fact, Reid consciously plays on this shifting of institutionalized aesthetic choice by placing Andre Breton among the characters he paints and problematizing claims of aesthetic progression and the nature of the avant-garde.

The use of Breton is a rather obvious way by which Reid alludes to his affinity with Surrealism. This isn't merely the case insofar as the artist uses various dreamlike and absurd images, but in the way that the pictures are formalized. For all of its fantasy, most of Surrealism was extraordinarily formally conservative when it came to the way it used framing, symmetry and paint. Its reduction of academic painting standards into easily swallowed, if not easily digestible, images was essential to its subversive ethos. More than a perverse conservatism though, Reid seems to share in the paranoia that was essential to that earlier movement and which informs the entire range of his aesthetic choices.

The historicized patina of his work creates a sense of distance from the subject matter which is rendered all the more fascinating by its weirdness. As much as the works depict an alien past, they simultaneously subvert the continuity which ties them to the present by creating a past populated by aberrant types. The tension in the works resides in the discrepancy between this objective anonymity and the mood of violence which seems to make it a necessary reaction. Such a tension springs from the attempt to form an identity, but one which is not that of an individual, but that of a group.

The surfaces of the paintings are flat and deny any substantial depth. Shadows are little more than smudges. The darkness, or in some cases, whiteness, as with the images of snow, isolate the figures, accenting the fact that they have no context. The figures are abstract, their identities indiscernible. They are rendered as a garish set of types who are not contextualized enough to function as stereotypes. As such, they are sensible by bearing a familiar resemblance to types without being accorded the same status. This is an important move because it denies them a contextualization that would allow them an identity. They are images which seem to demand anonymity. Too vague to be characters or caricatures, they have masks rather than faces. All the same, the small size of the paintings makes them curiously intimate, though not inviting.

One could read this set of operations in a number of ways. It could be a metaphor for his role in Team Macho and their ethos of group identity. It could be a slightly pessimistic search for authentic codes or a concession to their implausibility.

That Hideous Strength by Lauchie Reid
Posted by Malakoteron at 9:11 AM