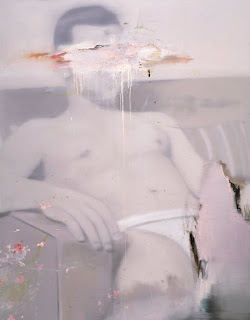 The combination is both thematic and, at times, literal, as names from Mann's text are scrawled across some of the paintings. Mann's turn of the century meditation on the 'voluptuousness of doom' is given a contemporary reinvention. The contaminated sewer world of Venice is replaced by the viral world of the internet superhighway. An intellectual's decline into myopia is transformed into a mindless lurch into anonymity. The decay of Nineteenth Century civilization is replaced by the Twenty First Century's nihilistic decadence. Of course, in both instances, one can accord a predatory tourism, the first in respect to the history of nations and the other to the history of individuals, as the source of this decay.

While Mann couched his version of pederastic lust in the guise of a perverse form of neo-Platonism, nothing quite as grandiose seems to be on show in Brouillette. But the straightforwardness of his appropriation of internet porn is not simple and is only half the equation. With the internet, Plato's cave is reborn and, with it, so is the spectacle of beauty and its many deceits. Even the idealized forms are replayed, but they are given an important twist through the way he uses his paint. Rather than Pythagorean ideas, the forms are transformed into heavy gelatinous blobs and smears that sit upon the surface and denude the illusions of the photo inspired images to revel in their material nature as paint.

The images of young males are rendered in light and delicate hues, mostly blues and pinks, which are reminiscent of the soft colour palette of Victorian children's portraits. They appear like those tinted photos rather deliberately in order to point at the nostalgic vacuum that the predatory libido falls into. The softness and flatness of what are essentially mock photos allows for the principle point of contrast in the images to be between the supposedly recognizable and the added layer of paint, which is terse and corporeal but indeterminate.

The boys in the images are flattened and idealized, purified in a sense through their function as icons. The thick paint that smears across them is a heretogenous substance which is lumped together and wiped across the faces. Sometimes the paint creates a mottle of hues and sometimes one which would be deliberately inoffensive if it weren't for its thickness. These smears are a surrogate form of ejaculate. The gesture inverts the Platonic one which was so crucial to Death In Venice and by which the material could reach the transcendent. In this, they cease to be fantasy images and become images of the residue left by fantasy as reality takes hold again. One of the more intriguing issues which the exhibition raises is tactility. It is paint, in its most base form, not as a representation of ejaculate, but as an instance of it, that offers the greatest tactility.