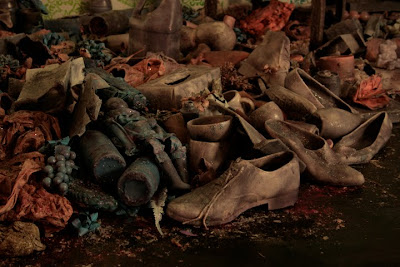 extrapolating its title from nikolai gogol's novel, dead souls, this work investigates the processes of becoming through one's relationships to material and its inevitable decline. this work develops elliptical narratives and multi-layered scenes by creating equivalences and correspondences between both these states (becoming/decline), emblematic of synthetic and natural phenomena alike. - Tricia Middleton

To do this, she created a large, cavernous, winding installation from foam and garbage. A Rococo architecture made out of garbage, refined and naked. The dreams which gold inspires were replaced by the far less pretentious presence of pink insulation. The rooms of the installation deliberately recalled Versailles. But this was a decaying palace, which is to say, it was far closer to the way Versailles was when it was actually inhabited by queens rather than the tourist bureau. Piles of things were arranged in delicately balanced blues and pinks, set in corners, some resembling the fallout of a bombing while others resembled abandoned cleaning routines. Both of these implications were necessary. War gives architecture value and cleansing it is what gives it meaning.

There are never heaps in her work. Although human beings certainly are heaps, the world around them is a little more complicated. Likewise, trash, which is not being, can never be a heap. The unliving, unlike the dying, retains a completely different relationship with singularity, one which divorces it from individuality but still disconnects it from the heap of becoming. The sterile has no need to become, it is already finalized beyond all that.

Her world is destroyed when it ends. That's its plan from the outset. The work is the march of those who move through the space, the aphid life. The viewer leaves a trail of dust in their wake which builds on the work, but not in some romantic way; they add nothing. The work could be destroyed today or tomorrow or a hundred years from now - the difference would not amount to much. It is the viewer who is a heap, each one of them, and the space hides whatever trace they would leave behind. The space has already been finalized and removed, unlike the remnants of history and museums which it parodies. Versailles is redeemed of its dangerous luxury by becoming a museum for the world's gawking tourists. This phony place of Middleton's retains its luxury for it is destroyed. From the moment the first viewer walks in, it begins to decay.

The work is dark: Literally, the light is dim. Topically too, since its about cultural demise. Nonetheless, it's hard not to want to touch it and play with it. On that level it succeeds at being wonderfully perverse. Actually, I think of her work in relation to Edward Burtynsky. They both, perhaps undeliberately, make 'environmental catastrophe' seem so bloody attractive. But whereas his work is flat, hers gains so much in tactility and in baroqueness. The innocence, or shall we say, dumbness, of his camera's eye is replaced by a kind of childlike innocence, that of a creative amorality.

Posted by Malakoteron at 6:56 PM