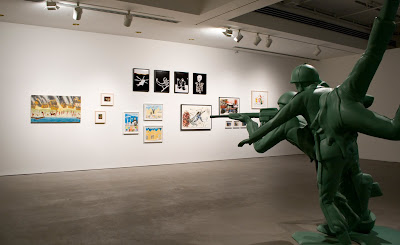 Death, it was actually a few weeks ago... It was only a week ago maybe, but it doesn't matter. That's when I saw Death. It was in an unusual place: A little university gallery tucked away in downtown Montreal. Not so unusual actually since the place was surrounded by homeless people, crackheads, cops, students and whores. It was literally Death I saw, if not actually death. Death is a little sculpture by the Chapman brothers. It's actually part of a larger series, but they only had the one piece, isolated. It was really isolated too, kept in a little glass box suspended on a kind of black pillar. Death is a head with bugs and worms. It was the first time I'd seen their work to face to face as it were. It was part of a larger exhibition about war and death called Diabolique being held at the Galerie de L'Uqam.

The head was small and seemed distinctly rubbery and smooth. It's size made it feel very intimate, almost like a cherished toy. A 'little death', appropriate to its original pairing alongside sex dolls. It wasn't the centerpiece of the exhibition, which really had no center. Instead, it was an exercise in curatorial vagueness. It might have better been called "Dread", since that's more what it dealt with. The name was taken from the Clouzot film, which was an integral part of one aspect of the exhibition, albeit one which was not successfully integrated. Or maybe the sculpture by the Chapman's wasn't called "Death" at all, maybe it was called, "Sex." While the brothers like to mix up the distinction, the exhibit didn't. There was something decidedly anti-septic about the space, no doubt thanks to its crisp white walls and high ceilings. It felt like a dead space, if not a funereal one...

In fact, the sculpture was called "War." It was a carefully decorated bronze which was made to look extraordinarily light. Combined with the extremity of its ugliness, it divorced itself from any sense of heaviness, essentially pissing on the longstanding tradition of exemplary military brass sculptures. There was also a sculpture by Douglas Coupland of inflated military figurines (which wasn't as interesting or as complex as his strangely charming Monument to the War of 1812). It was placed near the center, though it may have been more intriguing had it been in closer to proximity to Scott Waters recent, emotionally desaturated portraits of Canadian soldiers.

The exhibit brought together works from artists around the world, working in different media and levels of notoriety. There were videos and sculptures and paintings. Wanda Koop had some lovely paintings. Using a few gestures from the minimalist school and a relatively sedate colour scheme, she rendered soft images based on footage of the bombing of Iraq. Taking a hint from the war's overt aestheticization of violence, it's attempt to render war in terms of shock and awe, she pushed it further, creating the image of the war in a detached and Kantian hush of contemplation, anesthetized on the verge of the sublime. Similarly, Jason Thiry created what amounted to wallpaper based on camouflage, hinting at footage of warfare becoming the wallpaper of an overly mediatized culture. There were also a few collage works by Balint Zsako and a number of polemical paintings about the war in Iraq rendered in a style reminiscent of drawings of the Amerindian wars.

However, the organization of things seemed arbitrary, or at least practical, rather than thoughtful. Perhaps that was intentional, a way to encourage 'consideration of the palimpsested history of human violence and the way it breaks boundaries' as the notes said, but there wasn't a great deal to encourage that; neither provocation nor surprising juxtapositions were anywhere. Rather, there was just an illusion of clarity for things which on their own were fairly clear, but, together, became much less so. Simple proximity doesn't give life to contemplation. It had the kind of intimacy a model condo had, but perhaps that in itself is a statement on the relationship between the art world and war.
Posted by Malakoteron at 8:02 PM