There is no personal God, and our supreme effort lies in the destruction of our personality, the passage into the absolute sphere of being.

- Schelling in a letter to Hegel

These exhibitions ran simultaneously at different galleries in The Belgo building in Montreal. They had an eerie kind of unintentional resonance with one another.


Vaccinated with a phonograph needle

The American photographer Mark Ruwedel's "Photographies" at Art 45 was made of a series of stellar, black and white images. The majority of them showed records decaying in the desert. Some of them still had fragments of their sleeves remaining, the eroding faces crumbling over the vinyl. Supplementing these was a set of images of bras decomposing in the desert, flattened or crumpled up by brush. 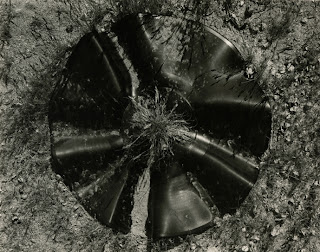 The desert surrounds a hole. Not simply a hole. The hole is surrounded by a record which doubles it. This doubling happens on at least two levels. First, in terms of geometrical form and second by being the capture of an absence: a hole in the present which holds a record of this past and can reiterate it ad nauseum like a stutter brought on by trauma. The depiction of the record as hole turns it into an allegory of history. As the repository of a captured event, isolated within space, compartmentalized and sent into an alien territory, it has an objectivity greater than memory. However, this objectivity has been doubly disembodied, both by the process of its capture and then by the disengagement of it from activity. Left to rot, it insists on the sterility of the event and its removal from the subject – a sovereignty of fact against memory. And once again this is all doubled by the other photographs in the show – the bras rotting in the desert. Two empty and crumbling spheres. A cultural relic: a formal redundancy. And so history receives another double image, this time as a pair of sagging tits and lost tactility. 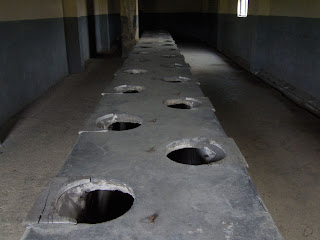 Not far away, another exhibition follows a similarly stark sense of the hole as icon. Not only does it take up the same kind of facialization of absence, but by the use of video, it musicalizes it. The video accompanying the exhibit is situated in a little black room as dark as a crypt. It statically captures the holes of a death camp latrine in time, the wind pulsing through the building and oscillating around each hole at a slightly different pitch, playing the latrines like a flute. This kind of aleatory aesthetic moment stands as something of a contrast to the rest of the show.

Marie-Jeanne Musiol's "Black Holes" at Pierre Francois Ouellette Art Contemporain is composed of 55 colour photographs of the holes in the female latrine of a concentration camp. They span the walls. Two or three levels deep, they are placed close to eye level and falling below. There's a general doppling of the photos which registers like a minimal pulse to give the hint of life. This minimal pulsation is important. If they had been hung a foot or two lower, the viewer would have to stoop. The entire event would insist on the baseness of these ducts; it would have insisted on their excremental purpose and imbued them with such a quality. Instead, Musiol elevates them, facializes them, makes them as intimate as a family portrait. 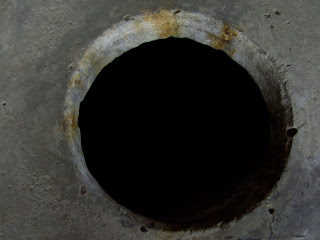 Each of the holes is different, marked by rust, ash and a specific sense of light stirring in its pit. These holes are intended to double as the heads for the dead inmates. Each hole, no longer the pit of an asshole but the gateway to the soul.1 The accompanying article from Prefix claims that this is an attempt to 'transact' (19) some kind of empathic relationship with the hollow remnants, each hole standing, so the artist claims, as a 'character' (22). This anthromorphization of space is an attempt to spiritualize the void, to suck the viewer into a black hole and resuscitate the corpse. This rendering of the object as signature has the added significance of transforming the material into no more than a sign, and a scatological sign, as Barthes once observed, is scarcely repellent because it can never smell. It is an empathic transaction in the most policed conditions which erodes its material reality. 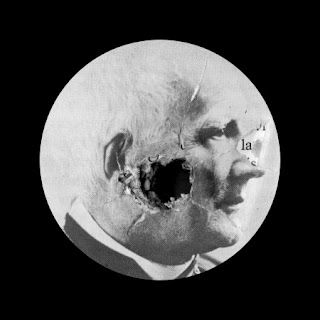 Étienne Tremblay-Tardif's "Bookworms" at ARPRIM literally drives a hole into history and splays it open. The exhibit consists of videos and photos. The videos document him drilling holes through books on the history of Québec and its key players. The images on the wall, and patterned across the floor, are the remainders of these performances, often documented and blown up. The doubling up of documentation (not as redundancy but as differentiation) and the inflating of the programme to a pseudo-monumental size raises it to a satirical pitch.

While the more melodramatic aspect of this performance, complete with blown-up video of defacement by drill-bit looped on the wall, suggests assassination, there is something more explicitly put into play. The entire production suggests a burrowing through, a levelling of material which de-differentiates the surface. It is history perceived at the level of a tick or parasite.

The deformation of faces echoes that of Ruwedel's records. The books are pulled apart and spread across the floor, blown up or left at their printed size. They are re-contextualized, their sentences left dangling and assimilated into those of their disparate neighbours. Rendered into reordered fragments (like the sounds on a record) they are set out like a quilt whose patterning can be assimilated by the viewer as they walk over them. The imagery runs at the foot and at the eye, demanding a kind of twitch which forces a subjective assimilation. This gesture is once again a stutter which forces the material to swirl around the hole of the subject. 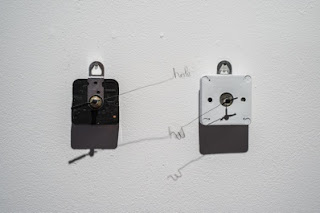 The word 'hole' is quite literally spelled out with wire in Karen Trask's show "Rien/Nothings" at Circa. The word stutters and tics along on a clock motor now devoid of numbers. It is time spatialized, set at the inverse of its usual position on the side of duration. A hole is perceived as a kind of capture of nothing. In this way, any hole is always a photograph of nothing.

Nothing is the theme of her show. She literally spells it out over and over again, the repetition denoting the fact that every reiteration is simultaneously an erasure. "Rien" appears and disappears throughout in light and in shadow, from one void to the next. It even spins around on a little turntable without a sound. 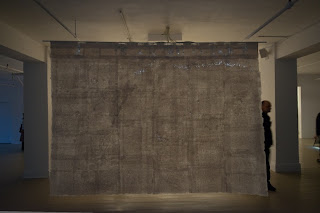 The majority of the show is made of paper, that pulverized remnant of raped nature upon which we scrawl terms to give the lie to our existence. It has that homemade feel to it. Another anthropomorphized void. Trask's massive white sheet serves as the perfect complement to Musiol's holes. The paper, filled with dozens of tiny lights, is both void and cosmos, just as the latrines of Musiol are. The crucial distinction is that Trask does not facialize them. There is no empathic connection in spite of the greater tactility of the show and even its hints of humour. The materiality takes precedence over any taint of substantial personality.

1. [Musiol seems in part inspired by Terrence Des Pres' book The Survivor,  in which he argued that the camps served to dehumanize people to either the function of excrement or, more generally, to excrement itself. He recalls in detail the manner by which this occurred: The extreme danger of excretion, often resulting in the 'patient' being forced into their own excrement by guards; the use of soup bowls as toilets to avoid assault at latrines; the spectre of the twelve hour day where the workers would urinate and defecate as they worked and they were reduced, in the words of one survivor to, 'Not even animals, but putrefying corpses moving on two legs.' (Des Pres 57) This was necessary for the destruction of the spirit of the inmates and for the psychological capacity of their custodians of the camps to carry out their tasks. In such a world, the Cartesian mind body split collapses and metaphors and symbols become real. Systematically, people become impure and an entirely concrete Hell is created. Des Pres explicitly links this to Hegel's notion of the 'secularization of Spirit', that is, to the concretion of essence in the material conditions of secular life.]↩
Posted by Malakoteron at 8:37 AM