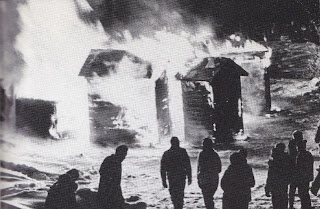 1967 is likely best known for the Montreal expo and the construction of Moshe Safdie's Habitat 67. The former demanded the excavation of a substantial portion of the city for the creation of an elaborate metro service, decorated by many of the rising stars in Montreal's art scene of the period (see the wonderful Metro de Montreal site for more). The latter was a utopian blueprint for affordable housing and a new vision of urban interconnectedness. It rapidly wound up becoming a luxury scene largely sealed off from urbanity. Each of these spaces still operate as decaying time capsules of the optimism, social as well as aesthetic, that were being promulgated by the state, both in Quebec and the rest of Canada. 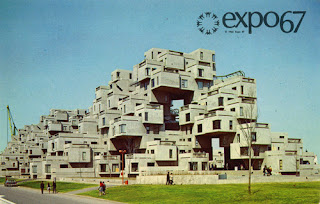 As Pierre Berton points out in 1967: The Last Good Year, it was also at this point that the bombings undertaken by Quebecois separatists got into full swing. He explicitly juxtaposes this with one of the stranger examples of the celebration of supposed progress and national unity of the period. The so-called 'biffy burnings' of the tiny space known as Bowsman, Manitoba are used as an ironic opener to his book. They also hold a place of iconic significance in the opening pages of Reinhold Kramer's Scatology and Civility in the English Canadian Novel. The bonfire, quite unintentionally, reads as the negation of the country's fantasy of a wilderness and its full-scale entrance into the urbanizing imagination of international capitalism.

The Montreal metro, decked out in Modernist designs, is simultaneously an extraordinarily brutal place, eerily reminiscent of those foundation block of European modernism, the Parisian sewers. It is precisely this sardonic view of Modernism, and the violence involved in it, that is superimposed in the burnings. In a very literal way, the sewer is taken up as the ultimate passageway to modernization and the burning out the outhouses stands as one of the classic Canadian jokes. Of course, it should be noted, that it was a deeply pathological joke, one which denotes very explicitly the country's final moments of relative autonomy and, if you like, enlightenment.

Bowsman's bonfire, fuelled by scores of outhouses, captured the imagination of the country. Here was a genuine centennial project (one of thousands) created at the last minute by a citizenry who hadn't put their minds to the country's hundredth birthday until the previous fall. (Berton 10) 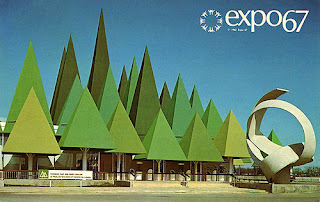 During a community meeting with the Centennial Commission, someone joked that since they just constructed a sewage plant, they should burn their old outhouses. The bureaucrats took it seriously. Since no one seemed to come up with anything else and the excess money needed to be spent, they leaked this idea to the CBC. The media was instrumental in making this absurd joke into banal reality.

The whole event was presided over with mock-religious solemnity by an actual clergyman. He was almost randomly appointed in charge of the whole event. He jokingly suggested they just go ahead and burn the biffies. The local cop/waterworks employee/utilities man/garbage collector took this literally and they started collecting outhouses. Soon, half the population was gathering the tiny structures and dragging them through the streets. People wrote on them or tied toilet paper streamers and balloons to them as a band helped them march down the street. Four hundred people gathered to sing and watch them burn while the clergyman inaugurated the celebration.

"The time has come," he intoned, straight-faced, "to destroy friends who have held up their ends through the years. They have fulfilled their duties under fair and foul conditions. They have always stood ready to meet the needs of anyone and give them support as well as providing a good place to read the most recent catalogues. As the blaze is kindled and these outmoded buildings go to their final rest, shed not tears, for they have served us well and the light they provide as a final service is fitting as we enter our centennial year. (Berton 12)

As an addenda to this singular moment in the cultural expression of Canadian modernity, Bowsman recently conducted another public destruction. In 2010 they brought down the last of their grain elevators, symbolically putting an end to one of the area's most longstanding socio-economic markers.