Jack Chambers: "The Light From the Darkness" at Museum London 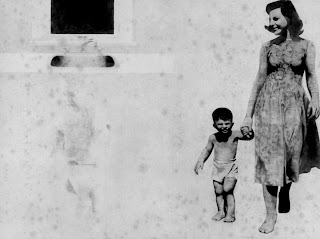 The moment of "white light" is the moment of perception ... It is the seminal brilliance of perception - that blind vision of unconscious intelligibility, never seen nor known except as unknowable, which makes a work of art real. (Jack Chambers)
This is the first time that the 'so-called' silver paintings of Jack Chambers have been reassembled in forty years (I like it when things are actually labeled 'so-called': it's like something out of Lewis Carroll or a piece of Marxist anthropology from the 1930s). They are displayed alongside his film works, appropriately enough since he referred to them in explicitly cinematic terms as 'instant movies'. They developed at a crucial period in his short career, a time when he was stylistically restless and momentarily breaking from the strictures of the classical European tradition of academic painting which he had been steeped in. They are not, however, casually experimental, but probing. Nor are they a flirtation with techniques that were in the air, but rather a deeply skeptical analysis of the medium that he would continue for several years before devoting himself to what he dubbed 'perceptual realism'. This context is important on a number of levels. As he sought a truly localized art, he reacted against the colonial tradition in both of its modes, as either the influence on style exported from Europe or, perhaps more immanently dangerous, that exported from south of the border. He was also gradually stripping the medium to what he regarded as essential – the image – in what was, to a substantial degree, a polemical attack on the direction painting had gone in since the second world war.

Chambers' most active period was when the arts scene in London was ratcheting up its emphasis on localization and nationalism, a tendency which would take an avowedly theatrical anti-American tone with his friend Greg Curnoe. The works on display by Chambers are part critique of pop, part embrace, but it is only either of those things on a superficial level. Whenever I read about these paintings, Warhol's silver paintings almost invariably get name dropped, but there are enormous differences. In both artists, one finds the complete saturation of the world with death, almost to the point that there is nothing to existence but dying. In Warhol, this was sublimated into glamorization and campiness. As all of Andy's talk about being a machine hints, there's a distinct dread of material existence which underscores his work. Unlike Warhol and his obsession with the glamour of death, death for Chambers was a radically everyday and intimate encounter, something which is testified to most explicitly in his film works. While both artists were intensely Catholic (religion played a frequently under appreciated role in both of their bodies of work), what was at stake for the American is what would come to be at stake for Conceptual Art, namely a glamorization of banality. In his case, the reification of consumer objects: Warhol's items became fetish items for a crass kind of immortality. Chambers did something completely antithetical to that and, in many respects, less humanistic, because he had rejected all of the dualistic baggage which makes glamour possible.

One of the most striking things about the Chambers works, and which I can't recall anyone mentioning in the sparse literature on the subject, is the fact that the majority of the pictures are done on plywood or particle board. Although the images have a blatant iconic quality, and their smooth surface is often mentioned, there's nothing of the sort there. Rather, the surface is deliberately rough and highly textured. They are explicitly not flat and unified but texturally artificial in a gruff way, full of shifting densities which cause subtle lighting effects due to the volatility of the surface. These add to the sense of materiality and offer a different level of illusionism than the simple play between positive and negative. In fact, in a very real way, they complicate that relationship in what must have been a deliberate choice. 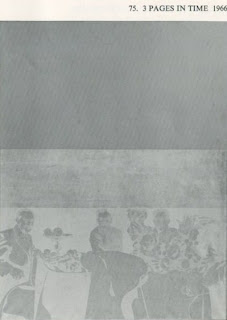 In spite of the fact that Chambers was quite consciously working against the grain of the contemporary art scene at the time with his use of figuration, it's impossible not to see the debt to geometrical abstraction which the silver paintings have. Maybe it's too obvious for anyone to bother pointing out, but it's worth acknowledging. There are complex rhetorical games he's playing with it and they're riddled with paradoxes. It is not strictly parody that he's doing either. Rather, he's taking advantage of geometrical abstraction's attention to rhythm as a means of further delineating time. Even while doing this, however, he is still playful. The use of 'color options' is part a printer's joke and part a jab at the kind of painterly reductionism practiced by Mondrian. Chambers may use the same rigidly geometrical forms, but his colours are almost inevitably impure, mixed and, in the case of silver, a neutralizing agent rather than one that is differentiating like the black favored by abstractionists. These formal elements are further complicated by the use of images painted off of photographs or art reproductions. Narratives, rather than the events or characters of Warhol, are implicated. They are not linear ones though. Instead, they are highly condensed and undifferentiated to the point that any causal stream is voided. In this fashion, they retain the intensity of the event, while placing it on a more deliberately cosmological level. What all of this amounts to is a method for creating simultaneity, a method, in other words, of using line against itself to create a non-linear configuration which retains both the kind of spiritual weight of someone like Barnett Newman while retaining the figure. 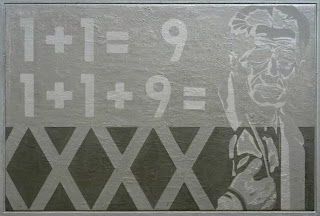 There is a deliberate minimalizing of brush strokes, but this is not to give them a mass produced appearance (although he made multiples of some of them) but to depersonalize them and attempt to minimize style, a process which Chambers would push further later in his career. There's a desire for transparency at play. The silver's capacity to optically change the figure makes the images exercises in seeing. They're special effects paintings, but never gimmicky, always with an art historical self-consciousness and deliberation. As in Pop, he uses images from popular media, but they aren't glamour shots and they aren't disasters: they're non-descript and anonymous, almost random. These are mixed up with Ingres and references to Baroque painting, equalizing the two things within the plane of neutrality. This technique is furthered by his slightly mysterious use of numbers. The presence of numbers are part of the work's general schema of reversibility. Neutrality works against identity and for interchangeability because everything is already made of everything else and can, therefore, go into everything else. Mathematics flow in a stream of jump cuts and reflections. Each equation is an instant movie, a method for breaking down time and space to reassemble it. 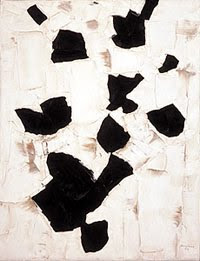 While Warhol is often the point of reference for the silver paintings, one could also look to fellow Canadian Paul-Émile Borduas who, only a few years before, had been rigorously pursuing the reversibility between figure and ground. The similarities between Borduas' late, predominately black and white paintings and Chambers' are complex and not completely obvious, but they are genuinely there. In those late works, Borduas created strictly composed paintings, heavily relying on a set of formal dichotomies that are synthesized into an unstable neutrality. The figure was never stabilized; rather, it was mobilized. The dissolving of ground was accented by the fact that light could be mobilized across the plane based on the density of the paint, continually shifting the delineation of its terrain according to the angle at which it was viewed. The overt duality which the use of black and white might conjure was subverted. They do not function as positive and negative registers but in equilibrium as interchangeable aspects. Borduas accomplished this through the densities of paint, conscious of how they will capture and light and play off against each other, deliberately creating a surface which is unstable and indefinite. A tension, but also harmony, is created in this. This complicated the illusion of depth, making it difficult to discern if the figurative elements are receding in space or not. It is very close to the same special effect that Chambers sought out. Neutralization through the ambiguity of the figure is what Chambers pushes even further than Borduas. Figure and ground only become functional distinctions based on the manner of viewing. They become optically activated and mobilized.

In these works, Chambers tried to paint time. But what does that mean? It means painting with light. Through the rest of his career, he would obsess over photography and what it meant to painting. But even before he ventured into his perceptual realist phase, he was introducing the importance of painting with light, only in a different way. The silver paintings work by light. Time is the fluctuation of light. He began trying to create a realism that was not concerned with space, as had long been the case, but which dealt with the movement of light, its fluctuations and emanations. For him, light was the greater part of corporeal reality and, therefore, of spiritual truth (there's very little verticality in his work). This was something that artists had long failed to properly consider, relying instead on the degradations of light, on the silhouettes of objects and on surfaces. For Chambers, light and time are unified as the movement of God, manifest as the fluctuation of Spirit, as the force of intelligibility. 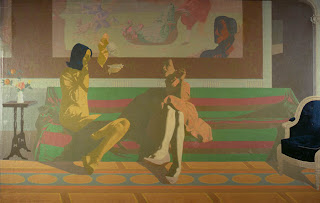 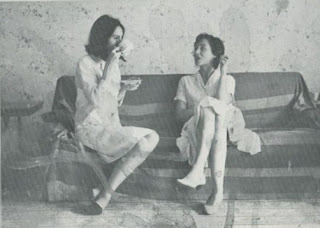 If one looks at a connected work like "Olga and Mary Visiting," it becomes clear what is at stake. Working from a photograph allows the artist to fix a moment, or string of moments, in time. Chambers explained that a painting is an accumulation of particles forming the experience of lived space. Duration is the movement of light, accumulated into a density which can be focused into an image. The image is meant to be rendered not as a description or a representation but as a kind of Divine machine which enacts a quasi-holy moment, that is, it reveals the Objective facticity of God. 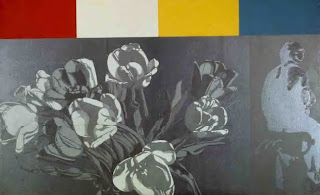 Like Hart of London, the works deal with history in a way which is forceful and sweeping. In effect, the historical is made to inhere within the single plane, not through Joycean cacophony (as is, to a degree, the case in the aforementioned film) but through neutralization. It is here that the conflict between creating an artwork that responds to the unique demands of a specific moment of material existence comes most clearly into focus. In this, he responds to his often stated dilemma about being a classically trained painter in a territory where this was not necessarily a tenable option. Not only was he utilizing experimental new techniques, he was doing so while consciously appropriating imagery from (largely neoclassical) art history. One of the most persistent paradoxes in Chambers' work is the weight of history and, simultaneously, the constant disavowal of it by virtue of acknowledging the neutralizing force of Time. Essentially, he unites the two things and neutralizes them in much the same way he neutralizes space by gridding his figures in a way which is aionic.

Jack Chambers: the light from the darkness, silver paintings and film work at Museum London.
Posted by Malakoteron at 5:52 PM