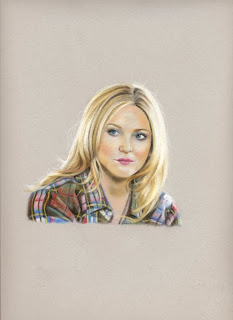 At first glance, there isn't really that much uniting the works on display. Not until you probe a little more and realize that they are essentially bound by a kind of faith. Sometimes this is slightly detached or doubtful. Sometimes it's smug or fanatical. It's an attempt to have faith in the present: the present not so much as a temporality, but as an object which can be contemplated. It isn't ownership that's the question. After all, there is no ownership in faith, only the faithful and their contemplation. Therefore, the works are a fetishization of the present.

Why the hell would anyone want to do this? Well, like any other adventure in faith, however wise or misguided it might be, it is, at bottom, a matter of desperation. One becomes desperate for the present because it becomes clear that it's never existed. There has never been a present anywhere and never will be. So what becomes active in the process is the misapprehension of things, specifically of temporality itself, because it is the immediate world that is experienced as death. Or more accurately, the immediate world is death and the misapprehension of this is what constitutes temporal consciousness' subjectivity.

Graham Gillmore plays this out in operatic terms. Actually, they're more like the terms of a Turkish soap opera I used to watch. Appropriating text from an evangelist, he sets it out as a lengthy stutter where each letter is isolated on its own meta-page within the flatness of the pictorial plane. The great Book which is the basis of such religiosity is fragmented into discrete elements, each of which is insensible on its own and which, together, sing in a garbled voice of the implausibility of the present. For the evangelical after all, the present is a kind of suspended time, one between the Fall of the past (one of his images is placed halfway between two floors of the gallery, acting like one of the levels of Hell) and the infinite future that arises at the end of time. While Gillmore may be using this ironically, every action which he performs is actually in complete conformity with the Christian passion which it takes as its object.

Karin Bubas' work continues her multimedia obsession with banality and nostalgia (at this point, it's hard to really make a distinction between those two things most of the time). In her earlier work, these tendencies took on the more established form of a kind of mildly critical examination of sites of longing, whether that was her photos of grandparent's home or her paintings of characters from Dynasty. In both cases, it was a rumination on the vanished world which may exist as the emotionally residual but was recast as an enticing ephemerality.

Her take on a current cast of soap characters (The Hills), attempts to insinuate this same kind of residue into the present through a process of faux antiquing. The visages of the stars are each painted in a kitsch 80s style, the kind you would often find the family portraits of sitcoms of that period done up in. The present is always rear projected, the matte background for the images themselves. By projecting the recent past into the distant past, into a past which the painter likely has little conscious experience of, it is not an alienation effect which is created, but a sentimentalization - the opposite of Brecht's materialistic dialectics. In its place, there's an empathic virtuality which is predicated on the negation of its facticity so that it can be subsumed within a subjective vacuum. That is to say, within the dread of death and corporeality. 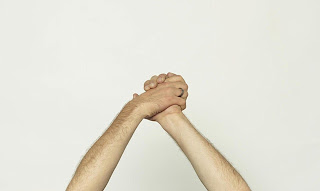 Within this context, the inclusion of the work of Derek Liddington actually makes sense. He portrays himself holding hands with Chris Burden and Bruce Nauman. The liner notes say it's an arm wrestle but that's the only thing that actually gives it any direction. The vacuity of the image, and its inability to even render this hackneyed and repressed form of violence in representation, is the manifestation of a strategy of corporeal negation. It may seem like a gentle geste, but it's full of a kind of snide cruelty: his hands function as a self-aggrandizing sneer in the continuing pathology of contemporary art's venal production of it own self-loathing. It's an allergic image based in an abreaction to naked sensation rendered as a sterilized icon. For this reason, its close proximity to Douglas Coupland's image is pertinent since it is, after all, a test strip for the libidinal investment in vacant iconicity.