We Are Wild at Xpace. 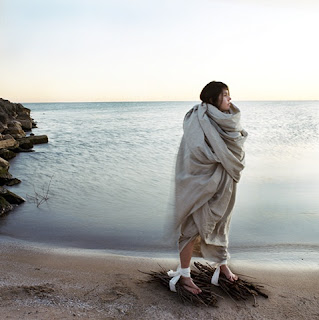 Nature is one of the most dangerous notions that human beings have ever fostered so I've always found it perplexing, and disturbing without equal, that so many of the art works which seek to deal with it seem so utterly innocuous. Perhaps that's merely imaginary on my part, having spent most of my life living in villages or the woods. It's the urban imagination that invents nature as its other, when it is, in fact, merely its double, albeit a double in different clothes.

All images of nature are absurd. The plane, particularly in photography, seems unable to cope with its porousness, its extraordinary lack of depth. Depths are for cities. You can only have depth once you've built a sewer. That may be an overly sentimental attitude. Of course, it is one of the cardinal cliches of Canadian cultural identity that one gets one's identity from the land.

The majority of the images in the exhibit are in squares or portrait type rectangles. These shapes eschew the strong horizontal of the land and stumble into a stunted verticality where bodies, when they are present, rest near the bottom of the frame. This serves to further accentuate the power of the frame, suggesting the 'outside' nature of these images while simultaneously placing them on an inside which may not be cloistered, but is certainly segregated. There is no sense of flight to nature, no departure, and all of this is crucial to the gesture which underwrites the entire operation with its parodic sense of metaphysics.

The 'return to nature' and the battle against it for survival, have been two of the essential myths of modernity. The former finds itself represented in a way that verges on the clownish, albeit a clown bereft of makeup or accouterments, in the photos of Nathan Cyprys. Unlike Spencer Tunick, who uses the nude in a landscape basically as a means to reinvent some of the more bland cliches of the still life genre, Cyprys' images of the nude human figure in a landscape retain anxiety. The off centre figure sometimes seems to be a piece of trash, sometimes an abandoned tribal statue and at other times just a particularly pale element of the land. Its features are distinct by difference, but not distinct enough to have an identity. Rather, they are a literal parody. The body attempts to return to nature by being buried, inserting itself within the possibilities of two worlds, but it's completely unclear that it ever left or full penetrated either of them. There is no narrative to allow the body nudity or clothing, instead it always wears a costume, one which is only another doubling of this stalled movement. 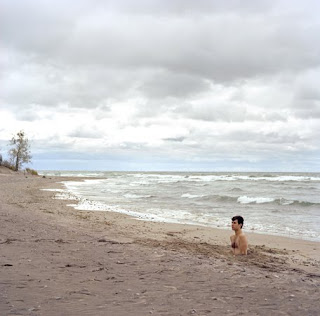 It's hard to imagine what nudity in nature would be. Perhaps there is a kind of nudity there, as we can see in the images where the bodies of trees are lit in such a painterly way. Night robs them of the robes that sunlight gave them and the attendant cliches which make the bush invisible. Dianne Davis' works show nature in unnatural light and turn the woods into a studio. That's as close to nudity in nature as anything is likely to get. It is the nudity of the double which casts its glance back and mocks the viewer who imagines that there is a nature out there somewhere.

One of the most intriguing things about the exhibit, perhaps unconsciously, perhaps in irony (perhaps it doesn't matter either way), is the way it fashions nature as a sort of boutique. Each of the images is too small to be a monument and not small enough to be intimate or sentimental. Rather, they seem set out like shop displays or a wall of advertisements – slogans for a world devoid of language yet still encapsulated in the semiotic forms of advertising. This is echoed in the works by Meryl McMaster which resemble stripped down fashion photography or in those by Darren Rigo where fields are rendered as display rooms for stacked objects objects. The humor in all of this is biting and the irony is cruel. Nonetheless, there is still an underlying, if thoroughly ambiguous, romanticism that suggests that nature was once something other than this, though that possibility is only that – a possibility, and one which cannot be verified. That may be the point after all, that the 'we' of the title is the urban consumer in the wasteland of Toronto where people fantasize that there is somewhere else, that is, that they could actually be someone else.